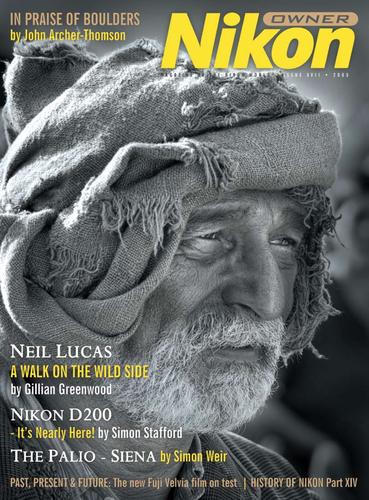 THE PALIO - SIENA by Simon Weir

Siena is known worldwide for its semi-annual horse race, The Palio, held on July 2nd and August 16th. Each of the city's contrade, or neighbourhoods, competes in a barebacked race in honour of the Virgin Mary. Simon Weir narrates and portrays the agony and the ecstasy.

A WALK ON THE WILD SIDE: THE EXTRAORDINARY LIFE OF NEIL LUCAS by Gillian Greenwood

Neil Lucas, a dedicated Nikon user, is a producer for the BBC's Natural History Unit. He has worked with David Attenborough on three of his major series: Trials of Life, The Private Life of Plants and Life of Mammals, as well as individual films for Wildlife on One and The Natural World.

IN PRAISE OF BOULDERS by John Archer-Thomson

The Nikoflex was a camera which never made it beyond the blueprint. Here in this magazine for the first time is the story of what might have been.

PAST PRESENT AND FUTURE by Simon Stafford

The new Fuji Velvia 100 film on test using a Nikon S2 rangefinder and a Nikon F6.

After months of speculation the newest addition to the Nikon digital SLR line is announced.

Life through the Left Eye by Paul Ringdahl

3D COLOUR MATRIX METERING II - WHAT ADVANTAGE DOES IS OFFER?

Ring the bells for film!