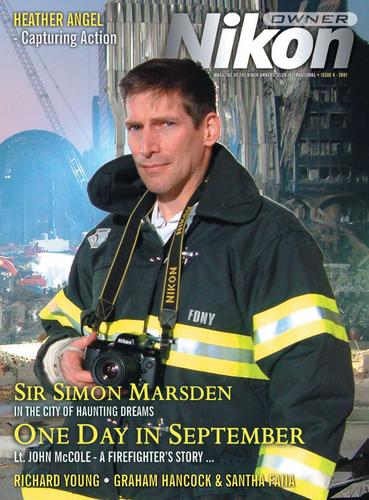 One Day in September - A Firefighters Story...
By Lt. John McCole

In 1961 Nikon produced a 3.5cm-8.5cm f/2.8-4 Wide-Zoom Nikkor that never went into production. Only one such example of this lens is known to exist. Gray Levett reveals this unique lens in this issue

In this, the final instalment of this series of articles, Simon Stafford covers the methods of supporting your camera and releasing the shutter to compliment the camera techniques covered in Part 1 and 2, to ensure you achieve sharp shots.

After the international success of number one bestsellers The Fingerprints of the Gods and Heaven's Mirror, Graham Hancock's new book, Underworld, with photographs by Santha Faiia, will be published by Penguin, Spring 2001, and contains five chapters on Malta. In this specially written article for Nikon Owner he gives us an advance glimpse at mysterious Malta.

Above & Beyond the Call of Duty