THE PALIO - SIENA by Simon Weir

Siena is known worldwide for its semi-annual horse race, The Palio, held on July 2nd and August 16th. Each of the city's contrade, or neighbourhoods, competes in a barebacked race in honour of the Virgin Mary. Simon Weir narrates and portrays the agony and the ecstasy.

SIMON WEIR - the son of two very keen amateur photographers, took his first photographs at the age of four on a Kodak rangefinder camera. His photography really took off when he was given a Zenit SLR for his seventh birthday, after which he never looked back.

As a child, his family holidays revolved around taking photographs - his father took slides and his mother colour prints, so, determined to be different, he took Black & White - perhaps the best grounding a beginner could have. He soon learnt how to develop and print his own work, and at the age of seventeen, he had his first exhibition in Oxford consisting of twenty prints of Tuscany.
Although he now works as a classical record producer (his other childhood love was music) his photography has changed from enthusiast to semi-professional status and at the age of forty, he is at last working towards his ARPS portfolio having attained the LRPS in November 2004.

The photographs in this article were all shot with a Nikon D2X digital SLR, 17-55mm f/2.8 and 80-200mm f/2.8 zoom lenses and a SB-800 speedlight flash. The images were shot as a mixture of RAW and JPG format depending on the circumstances and were captured to Lexar Professional 1Gb 80x CF cards. Raw conversion and post-production was done in Adobe Photoshop CS2.

On the day of the Palio, the city of Siena awakens early. For seven hundred years pilgrims, visitors, tourists and the Sienese alike have celebrated the ritual of this brief horse race and all that surrounds it. For a few minutes the only things that matter are ten horses, ten riders and the Contrade (the seventeen "neighbourhoods" of Siena) into which you are born, live and die and must pledge your unending support by the wearing of its symbolic flag.

The race is preceded by days of preparation, pageantry and intrigue and has been held since at least the 13th century, in honour, like almost everything in Siena, of the Virgin Mary. Officially instituted in 1310, a second race was introduced in 1656 when instead of being run through the streets, it was moved to the Campo, Siena's medieval Square, in which a special track of beaten sand is laid on the flagstones. Except at times of war, the Palio has virtually always taken place; even in 1919 when Italy was in the midst of strikes and rioting, the factions decided to defer their political disagreements until after the race was run. 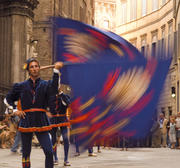 Even before the race, the hand of fortune has its role. From the seventeen neighbourhoods of the Contrade only ten may take part, drawn by lots and declared by the hanging out of flags on the Palazzo Publico. Further lotteries will decide both the horses and starting positions in the race itself. The jockeys, heroes who excite both love and hatred, are professional outsiders - the cowboys of the Maremma, the coastal plain south-west of Siena. They are highly paid with cash bonuses if they win, but are subject to shifting loyalties and may well be bribed to throw a race or whip a rival rider or his horse. The Contrade have even been known to drug horses or mount an ambush on a jockey before the start. The result is that in each race only three or four Contrade have a chance of victory and the others will conspire to defeat their traditional rivals, for losing is as important as winning. It is the horse that wins, with or without its rider, and the only rule is that reins cannot be interfered with; everything else is accepted and practiced.

The final trial race, the Provaccia, is held on the morning of the Palio and is followed by a ceremony in the City Hall where each jockey is formally registered and presented with the jacket he will wear. Then clandestine meetings take place at which the costs of pacts are confirmed and final messages are sent to jockeys who may be able to block others during the race, after which the horses are blessed in the churches of the Contrade. "Go, little horse, and return a winner".