It is ironic that as I sit down to write this piece I am listening to a BBC radio news bulletin report concerning the sad demise of Agfa, one of Germany's oldest companies and a stalwart of traditional chemical based photography. A slow reaction from Agfa to the explosive growth of digital photography meant the company's days had been numbered for some time. Yet a few days earlier, and in stark contrast to this lamentable revelation, I had attended a seminar for professional photographers during which a speaker asked for a show of hands from the audience to indicate how many were still shooting film; his question precipitated a veritable forest of arms to swing skyward! Be under no illusion film is still with us and in some quarters under active research and development (see my review Fuji Velvia 100 elsewhere in this issue).

Until relatively recent times film scanners, particularly those that offered resolutions sufficient for the production of high quality prints, were beyond the domain of individual photographers due to their complexity and cost. However, as with so many other devices spawned from the digital photography revolution, it is now possible to produce outstanding results from a desktop scanner that costs less than a professional quality zoom lens.

My current scanner of choice is the Nikon Super Coolscan 5000 ED, which has been connected to my Mac for over a year, so in the main I will refer to that model here. It represents the mid-point in the current line up of film scanners from Nikon; the other two being the Coolscan V (LS50), a 35mm film only device (plus APS film via an adapter), and the multi-format (maximum 6 x 9cm) Super Coolscan 9000 ED. It is a measure of how far these desktop scanners have moved on from earlier models when you realise that the entry level LS50 offers a specification equal to the previous mid range Coolscan 4000 ED.

There are several key features that set the Nikon Coolscan range apart from the pack; these include the lamp, the lens, the sensor, the software, and the dynamic range.

Many film scanners use conventional lamps, halogen or fluorescent types are the most common, to illuminate film during the scanning process but these have a number of distinct drawbacks; they take time to warm up, the nature of their light output will vary with age, and the heat they generate can distort film, or in the worst cases damage it.

Nikon have adopted an entirely different approach and use light emitting diodes (LED) as a light source across their film scanner range. LED illumination offers almost instantaneous start-up, stable colour output, and no heat generation, hence the name Coolscan, so there is no risk of the film being distorted during the scanning process with the consequent loss of edge-to-edge sharpness.

The core component in any film-scanning device such as the Nikon Coolscan scanners is the lens; Nikon use a Nikkor lens with Extra-low Dispersion (ED) glass elements to ensure a high degree of resolution, colour saturation, and contrast. The ED glass reduces the effects of axial chromatic aberration by bringing different wavelengths (colours) of light to a common point of focus.

The Coolscan 5000 ED uses a linear Charge Couple Device (CCD) sensor developed specifically for this scanner that comprises a dual-line with 3964-pixels (the Coolscan V uses a single line, and the Coolscan 9000 uses a triple line sensor), thus each model offers an optical resolution of 4000 ppi. 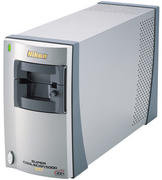 In addition to Nikon's own software (discussed below) the Coolscan 5000 has another cornerstone in the form of Digital ICE4 from Applied Science Fiction ™. This remarkable suite of tools offers state of the art functionality when it comes to correcting and improving your scans.