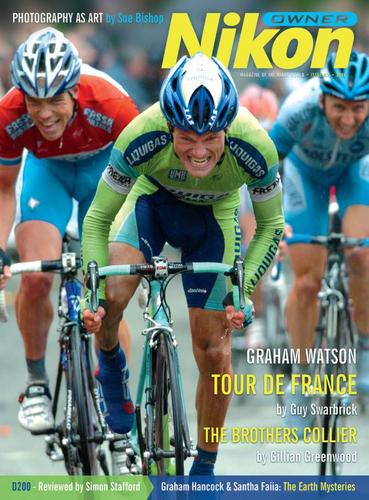 Photography As Art by Sue Bishop

Graham Watson has been photographing the Tour de France for nearly thirty years and has built his reputation on a broad range of styles that stretches far beyond the run-of-the-mill action shot. From stunning landscapes to powerful portraits, he has documented this most colourful of sports - and its global superstar, Texan Lance Armstrong. Guy Swarbrick has interviewed him for this current issue.

The Brothers Collier by Gillian Greenwood

Phil and Tim Collier are two brothers who have worked together on many projects. Their photographic work shows a profound empathy and understanding of the natural world, with its seasons and rhythms, its pageantries and mysteries. Gillian Greenwood explorers their work and their accomplishments in a two-part article, starting with Tim Collier.

One of the most sought-after and yet difficult to find accessory for the Nikon rangefinder cameras is the S-36 Motor Drive. It was instrumental in creating Nikon's dominance in motorised photography.

The Earth Mysteries - Part I by Graham Hancock and Santha Faiia

Graham Hancock and Santha Faiia begin their three-part series The Earth Mysteries, written exclusively for Nikon Owner magazine. Graham and Santha take us on a fascinating journey back in time in the their article, Ethiopia - Window on Archaic Christianity.

As a fully specified, professional grade, D-SLR camera the D200 defines the quantum leap forward in digital imaging technology that has taken place since its predecessor, the d100, was introduced only three and a half years ago. Simon Stafford takes a close look as Nikon's latest digital SLR in a two-part.

Richard Long tells us of his personal story in the Masai Mara, Kenya, and the moment of sheer excitement as the children and the headmaster of the Mara Riana Primary School watched water coming out of a pipe for the first time.