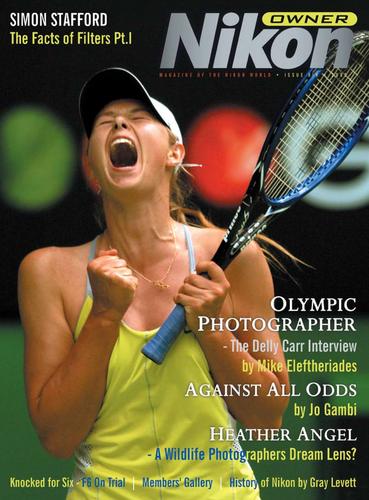 Capturing images of an age-old ideal for the Olympic Games and officially recognised in Australia as one of the country’s top freelance sports photographers, Delly Carr’s list of clients reads like a Who’s Who in the Australian sporting scene. He talks about his career to Michael Eleftheriades.

The Facts of Filters Part I by Simon Stafford

The first part of a two-part series on filters for both film and digital.

Heather Angel never made it a secret that for many years her favourite lens was the manual 200-400mm f/4 Nikkor. You can imagine her delight when the AF-S VR Zoom-Nikkor ED 200-400mm f/4G IF lens was introduced. In this issue, Heather reports her findings on this lens.

The Nikon SP has long been considered the pinnacle of Nikon’s rangefinder camera range. It is the camera to which many collectors aspire. It was discontinued in the early nineteen-sixties but now it is back – at least in a limited edition.

Following the news that Jo Gambi’s husband, Roy, had been declared in remission for cancer for the second time, they both decided to take a journey into the unknown and enjoy life together while they could. Their quest took them on an incredible journey through every continent of the globe, from the death zone of Everest’s summit in Asia to the chilling freezer of the Antarctic polar plateau.

Knocked for Six by Simon Stafford

Our technical editor Simon Stafford shares his experiences after trying out the Nikon F6.

Slim Callaghan is a retired member of H.M. Diplomatic Service, having served in postings as diverse as Iraq, Singapore, Russia, Italy, Libya, Bangladesh and ending as H.M. Consul in Nairobi. He still has a passion for travel, which he mixes with photography. He discusses his work in this issue.