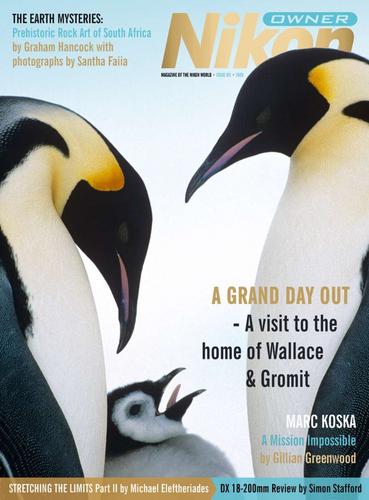 A Grand Day Out by Gillian Greenwood and Michael Bright

In addition to Wallace & Gromit The Curse of the Were-Rabbit, Aardman Animations has so far won Oscars® for Creature Comforts, The Wrong Trousers and A Close Shave. Aardman's plasticine figures have created a delightful and magical world beloved by all. Martin Shann tells us how he became Aardman Animations' chief 'boffin'.

Marc Koska O.B.E. is the Founder and President of Star Syringe Ltd.. He says "I have one basic goal: that all injections are safe and that no further lives are lost through the misuse of syringes". Through his pivotal invention of the K1 Syringe, and his subsequent founding of the charity SafePoint, he has been able to save over a million lives.

In Part II of his article on panoramic photography, Michael Eleftheriades continues to bring his considerable expertise to all the different aspects of stitching software and publishing panoramas.

We continue our exploration of the four seasons with an article and stunning images that are evocative of winter.

In the third part of Graham Hancock and Santha Faiia's series The Earth Mysteries written specially for Nikon Owner magazine, Graham examines the prehistoric rock art of South Africa that can be found in the walls and ceilings of remote rock shelters, while Santha captures some extraordinary images.

The AF-S VR Zoom-Nikkor DX 18-200mm f/3.5-5.6G IF-ED is the latest edition to Nikon's range of lenses designed specifically for their digital SLR cameras. Its specification suggests it might be the perfect all-round lens. Simon Stafford takes a closer look.