As we established in the previous article, to generate a good quality panorama we need to photograph a series of images at regular intervals and preferably using a panoramic head calibrated for our lens and camera combination. It is always advisable to shoot in NEF (Nikon Electronic File Format, otherwise known as RAW) as this affords some leeway in modifying the exposure and white balance in post-production. 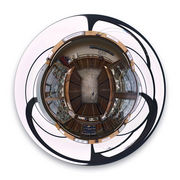 With shooting completed, we then import the files to our computer, and using a RAW editing package (such as Adobe Photoshop CS, Apple Aperture or Nikon Capture NX) we make any necessary corrections to the exposure and white balance. One of the most useful features of RAW editors for the panoramic photographer is the ability to apply the same settings to a group of images, ensuring consistency and better stitching.

After correction, images can be saved in TIFF, JPEG or PSD formats, but bear in mind that sizes can balloon when saving in 16-bit colour and at the camera's original resolution. Unless ultra high-quality results are required, I would suggest saving in 8-bit mode and at 6 megapixel resolution, as anything above will slow the stitching process and may also bring your computer to its knees.

It goes without saying that stitching is quickest accomplished on more recent Intel Xeon PCs or Apple Mac Pro's, because of their superior number-crunching ability. Hard disks of 200Gb+, as well as memory capacities from 4Gb upwards, are prerequisites.

One must not underestimate the amount of processes that need to take place for a successful stitch. The software has to calculate the lens field-of-view, which enables it to apply the necessary corrections, which include: warping, tilt, rotation and image alignment. Thankfully, the software has improved in leaps and bounds in the last few years, and the whole process is becoming easier and more accurate.

Stitching software falls broadly in two categories, the visual and the Panorama Tools (PT) based stitchers. In general, visual stitchers are easier to use and have more user-friendly interfaces. PT-based tools are technically more involving and are ideally suited for producing templates for batch [unattended] processing.

Panorama Tools are a suite of panorama creation and viewing applications originally developed by Helmut Dersch, a German mathematics and physics professor. After a legal wrangle with US-based IPIX Corporation, which was granted a patent on the use of fisheye lenses for creating panoramas, Helmut Dersch stopped further development of PT, but subsequently other companies developed software using his code as their stitching 'engine'.

It is worth noting that due to this patent, few packages can create panoramas from circular (180 degree field of view) fisheye lenses, and most have a self-imposed 160 degree limit. However, this does not pose any problems for Nikon digital SLR owners with DX sensors, as the use of the 10.5mm fisheye Nikkor in portrait orientation falls within this limit.

For a spherical panorama, we would use the 10.5mm DX fisheye Nikkor in portrait orientation, shooting 6 or 8 images around, one for the zenith, two for the nadir and optionally, an extra one of the ground. For a cylindrical panorama, we would normally use the 12-24mm f/4G Nikkor at 12mm in portrait orientation, shooting a minimum of 8 images around.

Cylindrical panoramas are not only quicker to capture, they also take a correspondingly shorter time to stitch, as they are usually shot in one row.

The stitching is quicker because the software only needs to blend adjoining images, and then close the panorama to complete the circle. Spherical panoramas however, are more complex because the zenith and nadir images need to be stitched over the whole length of the cylinder, therefore they are more prone to errors. Errors can be corrected by saving the panorama as 'Photoshop layers with masks', which enables problem areas to be selectively erased.