Knocked for Six by Simon Stafford

Our technical editor Simon Stafford shares his experiences after trying out the Nikon F6. 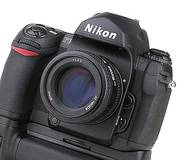 This article is intended as an adjunct to my initial review (Six Appeal) of the F6, which appeared in Issue XIII of Nikon Owner magazine. That feature was based on my experiences with a pre-production prototype of the F6 kindly loaded to me by Nikon U.K. Ltd, well in advance of the camera’s official announcement during September 2004. Over the past couple of months I have been shooting with a production model fitted with the MB-40 battery pack (not available to me previously), which has given me an opportunity to form some opinions on how the camera performs ‘in the field’.

As mentioned previously, the genesis of the F6 appears to be the result of a cross fertilization between two core structures of the F5 – namely its shutter and the film transport mechanisms, which Nikon have fine-tuned, and the metering (ambient and flash) and AF systems of a D2 series D-SLR camera. Then they squeezed all this technology into a body shell with a profile that resembles a portly F100.

The F5 represents something of a quantum leap in terms of external design from previous cameras in the professional F-series. Most notable is the ability to use the camera without the extra weight and bulk of a bolt-on motor drive (e.g. F3 with MD-4,) or extended battery pack (e.g. F4 with MB-21/23), and the change from a traditional shutter speed dial and lens aperture ring to command wheels for both controls. The substantial bulk and mass of the F5, coupled with the relative lack of familiarity most of us had with command dials when it was first launched, doubtless caused resistance to its adoption by some. However, the world of camera design has moved on since 1996 and with the models that followed the F5, such as the F80, F100, D1-series, and most recently the D2-series, Nikon have constantly refined their cameras.

Concurrent with this development is the way in which photographers have become accustomed to the new layout of controls, and developed their dexterity accordingly, so that making changes to most principal camera settings no longer requires taking their eye from the viewfinder. What I like most about the general handling of the F6 is the ability to switch between it and D2-series cameras, and carry on shooting seamlessly, without having to stop and think too hard. Plus these models all share the same battery (the F6 requires the MB-40 battery pack – see below) and many other accessories, allowing the amount of equipment you carry to be rationalized.

Minus the optional MB-40 grip, the F6 body is relatively compact, although it is still noticeably heavier and bulkier than the F100. As you would expect, the main controls all fall to hand very comfortably, but it is the small refinements that Nikon have made that set the F6 above its film predecessors. A single lock on the power switch (there is no second lock as on the F5), the angled sub-command dial, the asymmetric arrangement of the AE/AF-L and AF-ON buttons, the removal of the second lock on the camera back release, the changed profile of the Mode and Exposure Compensation buttons, captive rubber caps that cover the 10-pin remote and PC sync sockets, all the way down to the new style, demonstrate just how much thought and effort Nikon have put into the F6.

At the risk of being overly pedantic I would suggest the only control that does not feel instinctive is the user-programmable Function button. Tucked away on the front of the camera (you will find it at seven o’clock on the outside of the lens mount as you look at the F6 face on), it cannot be reached comfortably by the fingers of the right hand. For what it is worth I am now in the habit of having this set to operate Spot-metering so that I can switch between this and Matrix at the press of the button. I also remain to be convinced about the new style two-stage mirror lock-up feature, which, as I describe below, is selected via the film advance mode dial. Assuming you use a cable release in conjunction with mirror lock-up (you would, wouldn’t you!) you must press its release button once to activate the lifting of the reflex mirror, and then press it a second time to operate the shutter. It is probably just a lack of familiarity on my part but I find the functionality of this feature cumbersome, especially when shooting a sequence of pictures. (Note: Since the matrix-metering system sensor is located in the viewfinder head as soon as the mirror is raised, the F6 cannot perform any further TTL metering, so if the light level alters subsequently the accuracy of expose may be affected.)

Add the MB-40 and you gain two additional command wheels, a second shutter release button, multi-selector switch, and AF-ON button, plus two additional command wheels; shooting with the F6 held vertically is as easy as it is held horizontally, which is something you could never say about the F5. In my opinion the MB-40 raises the handling of the F6 to an altogether higher plane, as it not only provides the additional controls but also helps to balance the camera with larger lenses (e.g. AF-S VR 70-200mm f/2.8), regardless of whether they are hand-held or mounted on a tripod.