Richard Long tells us of his personal story in the Masai Mara, Kenya, and the moment of sheer excitement as the children and the headmaster of the Mara Riana Primary School watched water coming out of a pipe for the first time. 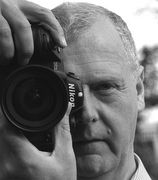 An enduring passion for photography, travel and wildlife took me to Little Governors Camp in the Masai Mara, Kenya in September 2003. Never-ending plains, vast skies, the best camp and the best game-viewing area in the whole of Africa. Paradise on earth.

During my stay I visited the Mara Rianda Primary School; I had not particularly planned to go and indeed prior to my visit I had not even heard of the school. One night around the blazing camp-fire, the camp manager told me about the school and as I had shown an interest he suggested that I visit it. So one afternoon in an open Land Rover I set off from my camp, with a guide, for a one and a half hour journey across the plains. It is approximately one hundred miles west of Nairobi and forty miles south of Narok, which by Western standards is in the middle of nowhere. My wife Pola frequently corrects me and tells me I should say `It is an extremely remote area'.

At the school I met the head teacher and he proudly showed me around. I asked him what the school needed. He looked at me, pondered and then said "If you mean by way of a miracle; we need chalk, white and coloured, pens and pencils - again coloured, exercise books ….." and so he went on.

His simple request shocked me: "Chalk would be a miracle".

I knew that if "chalk" was a miracle for the school then with help from friends and colleagues we could jointly provide an answer. I wrote to them and they provided the most generous support. We have been able to provide the school not only with essential supplies but also pay for a teacher. A U.K. charity was formed, The Mara Rianda Charitable Trust, and considerable help to the school has now been provided.

I now visit the Mara twice a year and am very privileged that these wonderful Masai people have allowed me to become an intimate part of their lives. My relationship is such that I was able to produce a successful portfolio of photos, which enabled me obtain my Associateship of the Royal Photographic Society.

Despite what may seem to be very primitive conditions, they are a very happy and content people. Their homes are made of mud, without electricity and running water. The children at the school drink the rainwater, and when that runs out, water is obtained from ponds or a river, which necessitates a walk of over one mile by the women.

During the last year a concerted effort was made to raise funds through The Mara Rianda Charitable Trust to provide the school with fresh water. Hydro-geological engineers were commissioned to survey the area to find the best location; it happened to be fifty feet inside the school fence! Last October drilling engineers started work and at precisely 3.18 p.m. on the afternoon of Tuesday 4th October 2005 water poured out of a tap.

I caught with my camera the moment of sheer excitement as the children and the headmaster watched the water coming out of the pipe for the first time. They had never ever seen water continuously pouring from a tap before as it is normally collected from the Mara river or local ponds!