There were approximately one million Nikon F cameras manufactured over a period of 14 years why then would anyone be interested in collecting them? The editor details the early models including one particularly rare example.

Over the years I have often been asked to write an article about the Nikon F SLR and in particular those produced during the first year of production in 1959. Nikon or Nippon Kogaku (Japan Optical), as they were then known, produced approximately one million Nikon Fs between 1959 and 1973 when production ceased. The Nikon F dominated the 1960s and became the 35mm SLR of choice by professionals around the world.

Why, you ask, would anyone want to collect Nikon F cameras? After all, with nearly one million Fs produced, would any of them be worthy of consideration for starting a collection? Well, part of the explanation might be this: as with all great SLR cameras that are in manufacture for a lengthy period, changes and alterations occur. Some of these are cosmetic whilst others are in answer to requests for improvements such as lessening weight or increased ease of use. The Nikon F is no exception. It is these changes that make the early F interesting from the collector's point of view. The F inherits numerous proven features of the Nikon S-series rangefinder model, and also incorporates mechanisms and advantages that had been originated and developed especially for it.

We see that the F inherited the following from the Nikon S-series: crank-type film rewind handle, film advance lever allowing one to wind in a single sweep, titanium foil shutter curtain, shutter mechanism, utilizing ball bearings, colour-coded flash synchronisation system, synch terminal and a camera back that is interchangeable with the motor-drive back. Additionally there was the innovation of an interchangeable viewfinder system, depth-of-field preview button, mirror lock-up, a range of different focusing screens and a colour-coded depth-of-field scale on the corresponding Nikkor lenses.

The Nikon F body is composed of 918 pieces. Serial numbering began at 6400001 in July 1959. This is an interesting fact and should clarify the oft-held belief that the first two numbers denote the year of manufacture. Clearly if this was the case, serial numbering would have commenced at 59 not 64.

From the point of view of collecting, the first year of manufacture is the most interesting. Over the years a lot of work has been done to identify variations in the eleven serial number blocks spanning the life of the F. I am very grateful to Calvin Ho who generously shared the fruits of his findings with me in the late 1990s. More recently we have further benefited from Uli Koch's substantial book The Nikon F Camera and if you are keen on the Nikon system and the F in particular, then this is the book for you. It is bound in three separate volumes and is the most important book produced on what many consider the greatest of all Nikon SLR cameras. It is a huge achievement packed with superb photographs, tables and exhaustive facts. Volume 1 contains a comprehensive description of the Nikon F from its first appearance in 1959 through each variation in great detail with a considerable number of images of each version.

The book also covers all the special and scientific models. This is the book all F enthusiasts and historians have been waiting for.

Volume 2 is devoted to the Nikon F lenses, and the third volume, the largest of the three books, covers the multitude of accessories for the Nikon F. 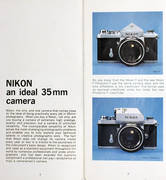 How does one identify an early F? Well the wind-on lever is cast with a diagonal or 'tear-shaped' tip, and is mostly solid, except that the tip is machine hollowed-out underneath. The self-timer lever has diagonal hatching and is moulded with sharp corners. All dials are engraved rather than having painted markings. The shutter speed dial is fixed with a single screw rather than the pair of screws to be found securing it on later Fs. The ASA (ISO) dial on the base plate is dual coloured (red and white) with two inner engraved semi-circles and a chrome serrated thumb-grip ring. The back of the Nikon nameplate is machine hollowed-out and a thin strip of sheet metal of identical shape is affixed behind the plate. The word "Japan" is engraved on the back-latch key. The eye-level (non-metered) prism is engraved "Nippon Kogaku Japan" underneath the prism roof. You will need to remove the finder to see this. The prism-retaining pins are diagonally cut, rather than being of the conventional half-circular shape. The original focusing screen is finished in satin black enamel with "Nikon F Japan" and the screen type (i.e. "A") engraved in white. It would appear that the first changes to the F began at 6400800 when the lever wind was altered. It is said that Mr. Masahiko Fuketa, who was one of the original designers of the Nikon I camera, was involved in the design of every camera up to the legendary Nikon F. He was very influential in Nippon Kogaku's continued growth and enlargement of their camera system. It has been stated that the F designation, which is used on almost all Nikon film SLR cameras starting with the Nikon F, was created in his honour.

The highest recorded production number for a Nikon F is 7451052 and it is said that production ceased in October 1973.

in the 65xxxxx block is 6500000 and I am delighted to be able to show you this for the first time in any publication. The picture of this rare Nikon F was taken by Simon Stafford.