Jackie Cooper is a founding subscriber of Nikon Owner magazine, and has been a photographer since the age of fifteen. She has had a number of her images published by Hampshire Wildlife Trust, RSPB South East, the Countryside Restoration Trust, and most recently for Plantlife. She is completely self-taught.

The first camera Jackie used was her father's ancient Praktica on a school trip to the Soviet Union. At university she bought her own Minolta XG-2 followed by XD-7, and after leaving, added a secondhand Bronica ETR-S and an ETR-Si.

She started her Nikon collection in 1999 with a secondhand mint FM2/T (titanium), and in 2000, she purchased a full Nikon AF based system comprising an F5 and a large collection of lenses. Until recently, photography remained a part-time interest rather than full-time activity. After working for twenty-five years in the computer industry, it was during the winter of 2004/2005 that Jackie finally decided to make career changes in her life and contacted local charities to offer photographic support. 2005 was a breakthrough year with Hampshire Wildlife Trust, RSPB, Plantlife, Countryside Restoration Trust, National Trust and the Local History Society amongst others, and Jackie joined other liked-minded enthusiasts to form the "Southern England Nature Photography Association." www.senpa.org.uk

Jackie continues to use a variety of Nikons, and digital has provided a huge impetus towards the advancement of her abilities and her work within the sphere of wildlife and invertebrate photography. For insect photography, she usually uses a D2X or D2H, which is most often hand-held but sometimes combined with a Manfrotto 680 Monopod, and an F5 or F6 if she is wants to make use of film to record insects and flowers.

"The image is of a female Brimstone butterfly feeding, shot with a D2H. The photograph was taken in a Sussex Wildlife Trust woodland in late August. It was a warm summer's day, and was one of a series of insects and spiders taken as part of the project I am involved in with the Southern England Nature Photography Association. My particular objective with the association is to support the conservation of wildlife and the environment by helping organisations with publicity, habitat, wildlife, invertebrate and plant photos, as they require. But, whereas the principal motivation behind this picture was the conservation of the environment, the manner in which the photograph was shot was opportunistic rather than overly planned". 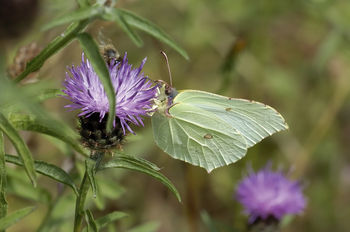 Jackie has captured in one photographic moment the exquisite detail of this very tiny life-form.