There has been much wailing and gnashing of teeth recently by some Nikon owners following an announcement by the Nikon Corporation that it was to cease production of all but one of its film cameras. Future production would be directed to producing digital cameras.

So we will say a fond farewell to a much-loved traditional SLR in the shape of the Nikon FM3A, which can trace its ancestry back to the late nineteen-seventies with the introduction of the Nikon FE. So if you have ever promised yourself a new Nikon FM3A, now is the time.

Reassuringly, Nikon will continue to manufacture and sell its flagship film SLR, the multi-award winning F6.

Additionally, Nikon has stated that it will also cease production of all but nine of their manual-focus Nikkor lenses and related accessories. They will continue to manufacturer and sell the following interchangeable manual-focus lenses:

Not surprisingly, production will also cease for large-format and El-Nikkor enlarging lenses. But why have Nikon made this major step? You have to turn to the official statement which reads: 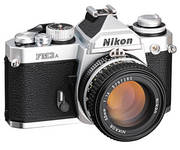 Following the success of our digital line-up over the last seven years, which has resulted in more than 95% of Nikon's U.K. business being within the digital area, Nikon Corporation has made the decision to focus management resources on digital cameras in place of film cameras. This decision will allow Nikon to continue to develop products that match the demands of an increasingly competitive market place.

Despite growing competition Nikon Corporation has continued to outperform the market, and has recently reported positive financial results, which saw group net profit climb by 20% in the fiscal first half which ended in September. Group sales also increased by 9.8% to 342.85 billion yen in the same period. Sales of high-end digital SLR cameras and the success of products like the D70s and D50 have helped contribute to these positive figures.

As a result of the new strategy Nikon will discontinue production of all lenses for large format cameras and enlarging lenses with sales of these products ceasing as soon as they run out of stock. This also applies to most of our film camera bodies, interchangeable manual focus lenses and related accessories, although Nikon anticipates that the products will still be in retail distribution up to Summer 2006.

Shortly after this press release was issued by Nikon U.K. Limited, we received a telephone call from a subscriber who said he and other Nikon users had found this statement ambiguous, in that it did not mention whether or not Nikon would continue to produce AF (autofocus) Nikkor lenses such as the AF-D and AF-G, which can be used on both Nikon film and digital SLRs. To clarify this specific point, I spoke to Nikon U.K.'s General Manager Simon Coleman, who said, "Let me reassure all Nikon owners to ensure that there is no misunderstanding. Nikon will continue to produce their wide range of AF autofocus Nikkor lenses types AF-D AF-G as well as DX Nikkor lenses." He added, "I think that it is really positive that we are still committed to the F6 (35mm film SLR). It's very important that we support that pro. area."

Nikon's association with photography goes back a long way. It began on 20th July 1917 when Nippon Kogaku was formed by the merger of three of Japan's leading optical manufacturers. Nippon Kogaku means Japan Optical. The name Nikon apparently comes from the first letters of Nippon Kogaku to which the letter "n" was added. Nikon's beginnings mirror that of Leitz and Zeiss who also started life as optical manufacturers. Nikon produced high quality optical products, for example: microscopes, telescopes, surveying instruments and much more.

By 1932 they were producing photographic lenses and the name "Nikkor" was first used to identify their lenses. It is a little known fact that until 1947, Nikon produced all of Canon's lenses for their Hansa Canon cameras. The first camera put into commercial production was the Nikon Model I in March 1948.

The history of the Nikon Corporation is a rich and varied one. They have created some of the greatest film SLRs ever made and they will no doubt continue to use these skills to address the world of digital. Whether or not you use film or digital it is important to realise it is just a tool to aid you to create images that satisfy your demands. On a personal note I do use both systems (film and digital) quite happily and will continue to do so for many years to come. Although it is sad to say goodbye to an era in which many of us have grown up, change is inevitable and nothing remains the same. Perhaps it is less a time for wailing and gnashing but a time to reflect on a proud lineage and a bright and adventurous future for photography.

Someone who has used Nikon equipment to great effect for many years is the distinguished sports photographer Hy Money.

On the inside cover of the book Hy on Palace - The Unique Sports Photography of Hy Money the Chief Sports Writer for the Daily Mail, Jeff Powell writes that:

"Hy Money was the Emily Pankhurst1 of female sports photography, storming the barricades with charm and determination, earning her the grudging respect of her male peers and opening locked doors for other women to follow."

This book contains Hy's selection from her massive library of over 10,000 Palace photographs, which represent a unique and important record of Crystal Palace Football Club's history.

Aged nineteen she arrived at Tilbury Docks from Bombay, with fifteen pounds in her pocket and a Box Brownie camera given to her by her mother, with a request to send her a picture of Buckingham Palace, once she had settled into her new life.

Having married at twenty-two, Hy spent her early years taking photos of her young family, but her enthusiasm for photography soon became a passion. She sent one of her pictures to a Sunday national newspaper and not only was it published, but it was given a by-line, at her first attempt.

A trip to Crystal Palace Football Club as a birthday treat for her eight-year old son spurred her to take action-photos. At this time women were not allowed onto the pitch to take pictures. But after a two-year struggle, she was accepted by the N.U.J.2 and soon became a familiar sight on the touch lines at the then First Division football matches all over London.

Hy was then acknowledged as the first woman sports photographer in Fleet Street. Her photos were regularly seen in books, in magazines and on the sports pages. Her first pass took her to other events, such as the theatre, politics, sports, corporate functions and Royal occasions. A long-time Nikon user, Hy's passion for her work is unabated. To order the book and find out more about this truly unique photographer, visit her website www.hymoney.co.uk

We have some exceptional features in this current issue. Brian Slater, dance and theatre photographer, has committed his life to a career of photographing this aesthetic art form in a very special way and we are fortunate to be able to glimpse at his spectacular work. Robert Sanger, world-travel photographer and writer shows us, with a series of powerful pictures and most useful guidelines, the practicalities of storm-photography. Heather Angel as ever brings her considerable skill onto the page with an excellent article entitled Night Life. Simon Stafford, our technical editor, takes us out of the realms of guesswork when he tells us how setting an accurate white balance value, thanks to the ExpoDisc tool, is really very straightforward.

Finally, our very sincere apologies to Simon Weir; owing to a topographically-challenged gremlin that accidentally got into the plumbing of the editorial system, there was an unfortunate error in the previous issue. Simon's most excellent article The Palio, Siena, was incorrectly labelled as occurring in Spain, but it is, of course, one of the most exciting and unforgettable events in the Italian calendar. You can view Simon's work on his website at: www.simonweir.com

1Emmeline Pankhurst (July 14, 1858 - June 14, 1928) was one of the founders of the British suffragette movement. It is the name of "Mrs Pankhurst", more than any other, which is associated with the struggle for the enfranchisement of women in the period immediately preceding World War I.