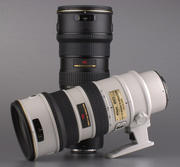 Do you have the jitters about the judders? Simon Stafford discusses the various merits of Nikon’s Vibration Reduction system.

Judging by the number of questions I am asked concerning Nikon’s Vibration Reduction (VR) system there must be many Nikon Owner readers who are unsure as to its value and proper use, so I thought it would be helpful to distil the relevant information in to a single article.

Let me put VR into perspective before I go any further – it is a useful feature for when there is no alternative to shooting with a hand-held camera. However, it is not a substitute for a solid tripod and a well-disciplined camera technique. If you think otherwise and rely on VR for all your photography you are only fooling yourself, as such folly will undermine the ability of your lenses and be reflected by the less than consistent pin-sharp results you will produce!