The subject of long running rumours, much speculation and frenetic debate on Internet forums the D2X was probably the most eagerly awaited Nikon camera ever. Its protracted gestation drove some Nikon aficionados to the point of utter despair as offerings from other manufacturers, most notably Canon, seemed to arrive with metronomic regularity. Their frustration deepened as these cameras earned well-deserved plaudits, yet there was still no response from Nikon but then they have never been in the game of releasing products with unseemly haste, preferring to refine their cameras as far as possible. In the case of the D2X they were under the severest pressure to 'get it right' first time; in a highly dynamic and fickle market anything less would have spelt potential disaster, and risked the loss of their credibility to produce a digital SLR to meet the exacting demands of professional photographers.

It is to Nikon's credit and the good fortune of the world of photography that the D2X hits the mark in nearly every respect - it is probably the finest camera Nikon have produced to date. 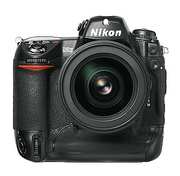 The D2-series cameras represent an entirely new branch on the evolutionary tree of Nikon's digital SLR development, as no stone has been left unturned, both inside and out, in assessing and re-working virtually every component and function of these cameras. The D2X has further refinements that take it well beyond the original D2H, although the recently released D2Hs does redress this imbalance between the two 'flagship' models in Nikon's D-SLR line up.

Central to the D2X is its completely new CMOS sensor designed in co-operation with Sony who actually manufactures it. Part of the anxiety that gripped those eagerly awaiting the new camera was founded in the inherent qualities of CMOS technology, principally the higher electronic noise tendencies of CMOS over a CCD sensor. Coupled with the fact that the sensor adopts Nikon's established DX-format size (23.7 x 15.6mm) and has 12.4 million effective photosites squeezed onto its surface, which means they are just 5.5 microns square, approximately! The smaller the light-capturing area of a photosite, the greater its propensity to generate noise, which could, potentially, compound the noise characteristics of a CMOS sensor. Nikon have employed a variety of ways to minimise the effects of noise issue. The total number of photosites (more commonly referred to as pixels) on the D2X sensor is 12.84 million and yet only 12.4 million are image-forming; the remainder are used in a border area and used to assess the background noise level as part of the two noise reduction process that the camera performs; one for long exposures and the other for high sensitivity (ISO equivalent) settings.

The D2X also carries out amplification of the signal from the individual RGB channels ahead of the analogue-to-digital conversion (ADC), a system that Nikon refer to as "colour independent pre-conditioning", which also helps to optimise the white balance response. Finally, the camera keeps the image data at the full bit depth from the sensor; regardless of the file type it will save the image as ultimately. So conversion to 8-bit JPEG and TIFF files occurs at the very last possible moment to help preserve image quality during in-camera processing.

To be able to sustain the required rate of data flow from the sensor, Nikon have used a four-channel system (i.e. red x1, blue, x1, and green x2 - remember with a Bayer pattern filter there are twice as many green photosites as there are red or blue), which permits the camera to capture images at 5 fps at its full 12.4 Mp resolution, and 8 fps in the High-speed Crop Mode (HSC mode) with a resolution of 6.8 Mp. Having mentioned the Bayer pattern filter, it is also worth noting that the properties of other parts of the filter array in front of the sensor have been modified. The effect of the low-pass filter (anti-aliasing) is a good compromise; stronger than the filter in the D70 and D2H, so the incidence of moiré is reduced, but clearly milder than the overly keen filter used in the D100, which is responsible for the slightly soft appearance of unprocessed JPEG images from that camera. Unlike the original D2H, infrared (IR) response on the D2X is, thankfully, significantly lower due to more effective filtration. Thus, the problems caused by near IR light sensitivity of the former, which often afflict the rendition of red, purple and pinks is avoided.

The features of the D2X are well documented elsewhere so I shall not repeat them here - suffice to say that this camera, along with the D2Hs with which it shares all but the HSC mode facility, offers the user the most comprehensive set of user-defined options, coupled with the greatest level of sophistication available in any Nikon SLR camera, film or digital.