A Journey Through Haunted England 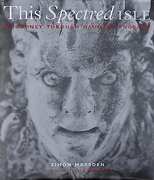 In his latest book the dark knight photographer, Sir Simon Marsden tells the stories, legends and mysteries of England's ghostly, haunted heritage. It ranges from the Cornish coast to the Lake District and throughout history: Romans, Tudors and the world wars by one of our greatest photographers.

Sir Simon Marsden is an internationally acclaimed photographer of the fantastic and supernatural who has devoted his life to photographing ancient ruins and landscapes, capturing in his images the atmosphere of their mysterious past and the eerie presence of the spirits that are still believed to haunt them.

His poetic, gothic images can be found in many important collections, including the Getty Museum in California and the Victoria and Albert Museum in London. He has also exhibited in New York, Milan, Paris, Tokyo and Venice.

His previous books include Visions of Poe, The Haunted Realm, In Ruins: The Once Great Houses of Ireland, The Journal of a Ghosthunter, Beyond the Wall: The Lost World of East Germany, Venice: City of Haunting Dreams and. most recently, The Twilight Hour.

'Seeing the man she loved so happy in the company of his wife and children she turned away from the window and walked slowly through the yew walk into the park, her eyes downcast and wet with tears. Passing through the tall wrought iron gates she followed a winding path strewn with autumn leaves until before her, shrouded in mist, stood the great oak tree. Resting her back against it she reached beneath the folds of her dress for the knife and in one swift movement plunged it into her heart.'

I spent my childhood in two very haunted manor houses in the heart of the Lincolnshire Wolds, a remote area of the English countryside. My father kept a large library of books on the occult and in the long winter evenings would tell us four children ghost stories by the fire. The lines above are from his version of the tragic tale of The Spanish Princess, or The Green Lady who haunted the second of these mansions. In the drawing room hung an oil painting of this beautiful woman in a green dress who was to have a great and lasting effect on me. It was accepted by family and servants alike that her distraught spirit haunted the house and I developed a real and lasting fear of ghosts. So much so that I sometimes wonder whether my lifelong obsession for photographing haunted sites is my way of trying to exorcise this fear?