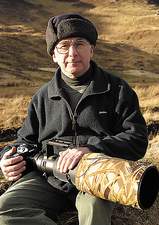 I can remember the day I purchased my first Nikon camera. It was some thirty-five years ago. I arrived at the shop clutching my hard-earned cash deter-mined to purchase a good camera. I had a good idea what I wanted but I looked at cameras from other manufacturers also. As soon as I picked up the Nikon it fitted into my hand like a glove and oozed quality. It was a Nikkor-mat FTn with a 50mm f/2 Nikkor lens. I used this camera for many years with much success and a lot of pleasure. At that time I was developing black & white and I was always impressed with the quality of the negatives and prints produced from this camera. To me, Nikon was the benchmark that all other camera manufactures aspired to.

The following years saw few changes in my equipment but the next change was to the Nikon F-301. I liked the film advance and again it had that “Nikon feel” about it so important with camera handling. I had the F-301 for many years and the next change was the F-501 with autofocus! Again, another major step forward for Nikon. I purchased a 70-210mm f/4 Zoom-Nikkor, which I found to be a superb lens. I had this lens for about fifteen years when I upgraded to an 80-200mm f/2.8. During this period I upgraded my camera bodies from a F-601, F-801, F90, F90x and onto the F100 and eventually the F5 – the ultimate in film cameras!

The next major step forward in my photography was to digital. Initially I was a sceptic, reading a wide range of articles and getting more confused. The initial cost of acquiring digital required a large initial capital outlay in relationship to film. However, a few months after the D100 was introduced, I took the plunge and purchased one along with the new 70-200mm f/2.8G AF-S VR. Over the last year I acquired a D1H, D2H and coupled with my new 500mm f/4 AF-S IF-ED II, they make an awesome combination.

During 2003 I obtained my Associate Distinction in nature photography with the Royal Photographic Society. All but one of the pictures was taken on the D100. Digital had truly arrived.

I can best describe my photography as a passion. I have always enjoyed taking pictures whatever the subject, and producing the final image as in my early years of developing and printing black & white pictures. Thirty-five years later, I am again in control of the total process from image capture to final print. My favourite subjects are nature and wildlife, with equestrian and corporate work making up the balance.

There were several pairs of Black Swans but these two in particular seemed to have a close relationship with each other and swam all over the lake together. I could see the making of a good image and followed the pair through my lens. However, whilst I could visualise the picture I wanted in my mind, the swans never quite came together as desired. I was concerned with the low light, and in particular with the 500mm lens and obtaining the picture at the right angle. I continued to follow the pair for an hour as they glided to and fro across the water. My patience was eventually rewarded when the pair came together and for a few seconds held the pose I was looking for.

The picture conveys to me eloquence, tranquility and companion-ship. It was absolutely fascinating to witness the behaviour between these two magnificent creatures. The scene was timeless and one could sit for hours just observing their behaviour. It was a privilege to witness.