Canon set a benchmark during 2003 when they introduced their EOS 300D (EOS Rebel in the US & Canada) as the first sub-$1000 (US) fully featured digital SLR camera with interchangeable lenses. Thereafter, for months, rumours were spawned over the nature of Nikon’s response until finally, in December 2003, the company officially announced that the D70 was on the drawing board. Using feedback on their highly successful D100, Nikon’s design philosophy for the D70 has been, clearly, to produce a better camera than its predecessor whilst reducing the cost of production. The end result is a camera that, in terms of speed and improvements to performance, takes a quantum leap forward in many areas, adds a few new features, and retains most of those that still make the D100 a very capable camera.

The D70 is assembled at Nikon’s modern production facility in Ayuthaya, just north of Bangkok, Thailand. It is no coincidence that a number of component parts in the D70 are shared with the F75, which is produced at the same site, alongside the F55, F65, and F80 cameras.

It is a small, compact camera that weighs 595g (without battery or memory card) making it just 80g heavier than the F80, measuring just 140mm (W) x 111mm (H) x 78mm (D). The chassis and outer panels are made entirely of polycarbonate, and it draws heavily on the styling of the D2H. Pick it up and immediately it feels comfortable in the hand; the textured rubberised material that covers many areas of the outer surface provides a good firm grip. If you are familiar with the D100 I expect you would be able to use the D70 without hesitation.

The camera features a new 6.1 mega-pixel RGB-CCD that provides 3,008 x 2000 pixel images at the largest image file setting. According to unconfirmed reports the sensor was apparently designed by Nikon/Sony, and is made by Sanyo (note this is not the same CCD as used in the D100). Whatever the case may be it has the same DX (23.7 x 15.6mm) format as previous Nikon digital SLR cameras beginning with the original D1. Due to the fact that the sensor is smaller than a 35mm film frame, the angle-of-view covered by lenses for the 35mm format is narrower, providing the equivalent to a 1.5x magnification of their focal length.

The D70 can store images using either the JPEG standard of compression at three levels (Fine, Normal, and Basic), or as Nikon Electronic Format (NEF) raw (compressed) 12-bit files (there is no option for uncompressed NEF files). Images can be sized to Large (3008 x 2000 pixels), Medium (2240 x 1488 pixels), or Small (1504 x 1000 pixels). A key feature is the ability to capture a RAW and JEPG file simultaneously like the D2H. However, on the D70 this is limited to a JPEG (Large) Basic size file; no other JPEG configurations are permitted in the dual file format mode. The D70 does not offer a TIFF file option. Again, akin to the D2H, the D70 has an auto-rotation feature for images shot in an upright, or vertical, format and these are then displayed on the LCD of the camera, or on a computer in the correct orientation without further work being required. However, this does restrict the size of the image when it is displayed on camera due to the small size of the LCD monitor. The user has a choice of three colour spaces. Mode I (sRGB) is optimised for portraits: pictures that will be used, or printed without further modification. Mode II (Adobe RGB) has a wider gamut of colours than the two sRGB colour spaces and is the best option for pictures that you expect to process extensively at a later stage. Mode III (sRGB) is biased for the rendition of blue and green, and is ideal for landscape and wildlife pictures that you will want to use ‘as is’ without further modification. 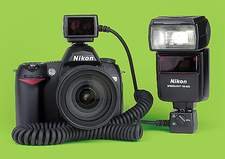 Data processing for the ‘lossless’ (Nikon’s word!) compression of RAW files has been speeded up (Nikon claim by about 200 times) compared to the D100. Rather than the disconcerting delay of about 40 seconds that it takes the D100 to process a compressed NEF raw file, the D70 processes and displays them almost immediately (assuming Long Exposure – Noise Reduction function is switched off). Storage is to an EXIF 2.21 file system, using either Compact Flash cards (Type I/II), or Microdrives, with FAT32 support for memory cards with a capacity in excess of 2Gb, and compatibility with Lexar Write Acceleration (WA) enabled cards. The camera’s various function menus are displayed on a 1.8in, 130,000-dot, low temperature poly-silicon Thin Film Transistor (TFT) LCD screen with adjustable LED backlighting.

For connection to a computer, the D70 has a USB 1.1 (12Mbps transfer rate) interface, and there is a video output option in either the NTSC or PAL format.

It has an ISO equivalent sensitivity of 200-1600 that can be set in increments of 1/3EV. The new mechanical-electronic shutter has a lag time of 100ms, and a speed range from 30 seconds to 1/8000sec in steps of 1/3, or 1/2EV, bulb (B), and a self-timer function with variable delay. Shutter speeds up to 1/250th second are controlled mechanically; for higher speeds beyond this point the shutter continues to open for 1/250th second but the CCD is switched on and off to simulate its operation. The benefit of this system is that the flash synchronisation speed can be raised, because it is no longer dependent on the speed at which a conventional shutter’s blades or curtains can be moved. Consequently, the D70 can be used with a flash unit at up to 1/500th second, which is a huge improvement on the 1/180th second sync speed of the D100, and makes it a far more versatile camera for daylight fill-flash.