Inside the Concorde Cockpit
By Michael Eleftheriades, AA Dipl.

Back in November 2003 Concorde was big news. There was disappointment when British Airways and Air France announced they were retiring their Concorde fleet, then there was excitement when Richard Branson offered to buy them. Curious but understandable that the offer was rejected, I thought, while looking at a photograph of Concorde, flying low over Brunel’s Clifton suspension bridge1. After its last flight from New York, G-BOAF had been captured a few minutes before returning to Filton aerodrome, its spiritual birthplace, for the final time.

From a young age I had held a special fascination for Concorde. It represented a triumph of technology, overcoming the obstacle of time and distance. It was a testament to the pioneering and collaboration between French and British engineers. It was true to its function while being sleek and beautiful. In a time of correctness and no-frill airlines, it was the flagship aeroplane, the one everyone aspired to. Wolfgang Tillmans published a book of his Concorde images2. Finally, the Air France accident was tragic, not only because of the loss of life, but because it was seen as the fall of a technological icon. 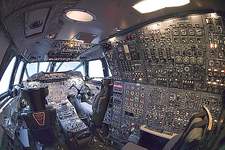 As I travelled to Filton on a dark, cold, wet and windy December morning with Colin Friend (British Airways Engineer and Concorde enthusiast), our conversation was tinged with sadness, but also with excitement. Sadness because the Concorde chapter was about to close and excitement with the prospect of capturing it virtually3. The night before setting off for Filton, I packed my panoramic equipment in a Lowepro backpack: this included a Nikon D100, Nikkor 12-24mm and 24-85mm zoom lenses, 10.5mm, 14mm and 18mm primes, a Coolpix 5000 (for backup), cable release, many batteries, a Kaidan panoramic head and a Gitzo tripod.

After a short stop for a traditional English breakfast of baked beans and scrambled eggs, we arrived at Filton. Amongst huge hangars and Airbus signs4 we visited the reception office, where we were given our passes for the day and directions to the hangar where Concorde was parked.

Huge, four storey doors opened, to reveal Concorde dwarfed in a hangar many times its size. G-BOAF looked brand new, like a freshly painted Airfix model. We walked around it, admiring its aerodynamic dart-like shape, while speaking to the engineers about its unique features: wings full of fuel tanks that balance the plane during supersonic flight, the cockpit visor, and the four Olympus engines with after-burners5. In the engine air intake, giant scoops move during high-speed flight to slow down the air so that it can be ‘breathed’ by the engine – without this, the engines would be destroyed.