The History of Nikon
Part X by Gray Levett

The legend of Nikon began on 20th July 1917 when Nippon Kogaku (Kogyo Kaisha) was formed by the merger of three of Japan’s leading optical manufacturers. Nippon Kogaku means Japan Optical. The name Nikon apparently comes from the first letters Nippon Kogaku to which the letter “n” was added.

By 1932 they were producing photographic lenses and the name “Nikkor” was first used to identify their lenses. This name was derived from “Nikko”, which they used on their early microscopes. The name Nikkor first appeared on a 10.5cm f/4.5 lens mounted on the Lily Hand camera. It is a little-known fact that until 1947, Nikon produced all of Canon’s lenses for their Hansa Canon cameras.

At the outset of World War II Nippon Kogaku were chosen by the Japanese government to be the largest supplier of optical ordnance for the Japanese military and they rapidly expanded to employing 23,000 people in nineteen factories. 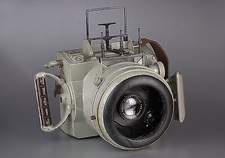 They also made aerial camera lenses for the Japanese military before and during World War II. What is perhaps not so well-known is that they also produced aerial cameras. Research work on these was started initially for balloon camera use in about 1930. In 1933, specific research and trial manufacture of a small sized aerial camera began. This was a hand-held device for aerial reconnaissance, which was nominated later as an officially ordained weapon and designated “96 type small aerial camera”. It used a lens of 18cm focal length and used dry plates in what the Japanese called “cabinet size”.

In this article we have images of a Nikon Air camera which was manufactured in 1941. The camera body is painted light grey and has wooden handles and a leather carrying strap. The camera body features a folding frame finder that is in its upright position in this photograph. It would have also been supplied with a removable optical finder (missing from this example). The camera’s shutter is wound by rotating the handle on the right hand side of the camera. The shutter speeds (100 –150) can be changed by turning the circular milled knob situated at one o’clock towards the rear of the lens barrel on the left- hand side of the camera.

The lens is a 179.40mm f/4.5 Nikkor serial number 583 and has a simple leaf type shutter consisting of four blades. The lens does not have diaphragm and the light would have been controlled through the use of the four filters, which were originally supplied with the camera. Additionally, the camera was supplied with a roll film back that had a glass pressure plate, and on the top of the back is a spirit level, plus four-plate film backs supplied with wood dark slides, an optical finder and two bubble levels; a metal shutter release cable, glass focusing screen and twelve light bulbs (12v) were used to illuminate the data chambers.