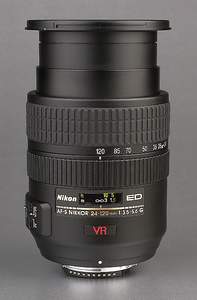 Hot on the heels of the long awaited AF-S VR 70-200 f/2.8G IF-ED lens Nikon announced the introduction of a second lens in which the AF-S and VR technology is combined; the AF-S VR 24-120mm f/3.5-5.6G IF-ED has been available since the late spring of last year and joins the ranks of a number of mid-range zooms now offered by the company.

To be honest these moderate wide-angle to short telephoto zoom lenses have never held any great appeal to me, because they simply do not fit with my style of photography. Equally, I can understand the attraction of such a lens to many enthusiast photographers looking for the lens component of a one-lens/one-camera ‘jack of all trades’ outfit, especially one that offers a 5x zoom range. At first glance the specification and price of this optic must certainly place it high on their shortlist but I would suggest that several other factors require careful consideration before deciding if this is the right tool for you.

In the hand the lens feels substantial and well made. There is extensive use of polycarbonate in its construction, including the lens barrel, so it weighs a modest 575g. I have used the lens on an F5, F100, D1X, and D100; in all cases it balanced comfortably.

The lens has 15 elements arranged in 13 groups. There are two aspherical elements and two extra low-dispersion (ED) glass elements to help control chromatic aberration. A two-ring zoom, it offers a five times zoom ratio covering a useful range of focal lengths from 24mm wide-angle to 120mm medium telephoto. At 0.5m the minimum focus distance, which is attainable at all focal lengths, is the same as the earlier ‘AF-D’ version. Since this is a G-type lens there is no aperture ring, so aperture values can only be set from an appropriate AF type camera body (see compatibility list below) via one of the command dials. The diaphragm has seven blades rather than the nine found in most professional Nikkor lenses.

In a similar design to the AF-S 24-85mm f3.5-4.5G IF-ED the zoom ring of this lens is at the front, with the focus ring closest to the camera. Unfortunately this is the opposite of many existing consumer and professional grade Zoom-Nikkor lenses so is likely to lead to confusion when switching between this and other lenses. The broad zoom ring is turned counter-clockwise by approximately a quarter turn to cover the extremes of the focal length range. However, the zoom action, which has a positive firm feel causes the lens to extend as the focal length is increased, with maximum extension occurring at 120mm, then as the zoom is returned to the 24mm setting two sections of the extended barrel collapse inside each other. Fully extended there is slight but discernable lateral movement of front section of the barrel, which although disconcerting does not appear to affect optical performance. 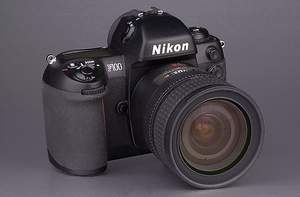 The focusing ring is rather narrow, difficult to distinguish from the barrel due to its low profile, and on the review sample at least, had a rather tight, rough almost ratchet like feel. The use of an internal focusing (IF) mechanism means that the lens does not change length due to the focusing action, and the lens hood bayonet and filter ring do not rotate. Immediately behind the focus ring is the focus distance scale set below a window. In common with many recent Nikkor lenses there are no depth-of-field scale markings or infrared focusing index point.