The year was 1977, yet most of us remember it as though it were yesterday. The lights dimmed, the curtains parted, and within moments the resounding John Williams overture stirred our imaginations in anticipation of what was to come. We were not disappointed. There we sat, awestruck, as a Rebel spaceship roared over our heads and into the distance, followed by a behemoth Imperial starship, lasers blazing. Held rapt through the entire sequence, the audience finally let out a collective gasp at the sheer verisimilitude of the opening shot. It was unlike anything we had ever seen before. It was the year of Star Wars, the year the cinematic canvas changed forever. 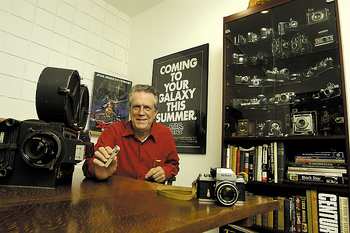 Richard holds a Minox B. He is flanked by: Mitchell FC high-speed 65mm camera (with a PC Nikkor 28mm f/2.8 lens) and Nikon FTn. Far right: Part of his collection, of Leicas, Nikons, Rollei's & Speed Graphic

George Lucas’ seminal space epic enthralled audiences worldwide, and was instantly hailed as a milestone of pop culture. The film set a box office record of over $400M. Time magazine said: “Star Wars, a grand and glorious film that may well be the smash hit of 1977, and certainly is the best movie of the year so far.” Borrowing heavily from the Errol Flynn swashbucklers and sword and sorcery tales of yore, Star Wars was innovative less for its galactic tale of stalwart knights and evil lords, than for its groundbreaking visual effects.

Well before the advent of computer generated imagery (CGI), ubiquitous in contemporary films such as Attack of the Clones, whole new technologies had to be invented to realize Lucas’ fledgling saga. Prior to Star Wars, the only space movies that offered any degree of photo-realism were 2001: A Space Odyssey and Silent Running, thanks to visual effects wizard, Douglas Trumbull1. But Trumbull was still moving models and cameras by hand, and compositing layers of effects inside the camera. It took an innovative form of visual effects technology called ‘motion control,’ a technique whereby cameras could precisely repeat a particular motion over and over again, and the resurrection of the bluescreen matting process, to solve the complex visual effects problems that Star Wars presented. (In all, an unprecedented 365 individual effects shots were required for Star Wars, with each shot containing many elements.)

Instrumental in ushering in this renaissance of special effects alchemy, was Chief Miniature and Optical Cameraman, Richard Edlund, a multi-talented photographer, cinematographer and special effects pioneer who received a shared Oscar® for his ground-breaking work on Star Wars. Richard went on to receive the same honour several more times while working on the rest of the Star Wars Trilogy and on other George Lucas films, including Raiders of the Lost Ark. He also received two BAFTA® awards for Poltergeist and Return of the Jedi, and an Emmy Award® for Battlestar Galactica. 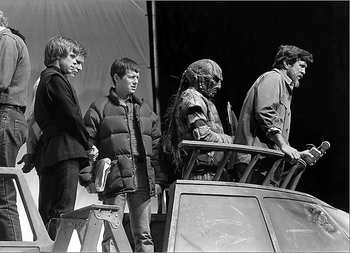 Richard is an eight-year Governor of the Academy of Motion Picture Arts and Sciences® and has been the Chairman of the Visual Effects Branch since its inception in 1995. He is also Chairman of its Scientific and Technical Awards Committee. He has won three Academy Scientific and Engineering Awards® for his technical innovations that include optical printers and the development of the Empire Motion Picture Camera System.