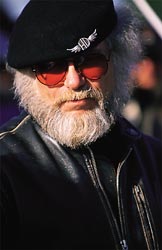 1903 was an extraordinary year for American enterprise and invention. It was in 1903 that Orville and Wilbur Wright made their epic flight, and Henry Ford started a car company. By strange coincidence, in the same year William Harley and Arthur Davidson built their first motorcycle.

2003 is Harley-Davidson’s one-hundredth anniversary, which is being commemorated with enormous celebration in the form of an open road tour. A number of cities around the world have been experiencing the world’s largest rolling stock party, with vintage exhibits as well as collections of Harley-Davidson motorbikes. The eminent photographer and editor-at-large of this magazine, Richard Young is an avid Harley-Davidson enthusiast and speaks to the editor Gray Levett of his love for this celebrated motorcycle.

Editor: When did you get your first Harley-Davidson?

Richard Young: I bought my first Harley in 1980 within hours of passing my motorcycle test. It was secondhand, but I was so overawed by the thought of owning one at last, that I gave the vendor the cash he asked for without even trying it out! I rode it with great gusto for a few weeks until it suddenly stopped working, but by that time I was so preoccupied with riding a Harley that I was forced to buy a new one! From 1980 until 1996 I owned about eleven Harleys. I gave up motorcycling over the last few years but this spring I finally bought one again. 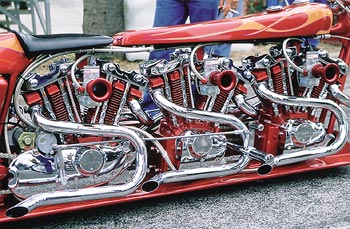 Editor: What is it about the Harley-Davidson that inspires this passion in you?

Richard Young: There are so many different reasons: the design and the mystique of the American image, the concept you can create with them, even the sound of the engine running. With a clever mixture of customising and accessories, you can also turn a Harley into anything you want it to be. 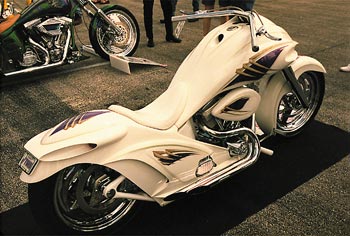 Editor: Have you got any particularly interesting stories as a Harley devotee?

Richard Young: A particularly exciting time was when I attended a fiftieth anniversary at Sturgis in 1990. Sturgis is a sleepy little town in the backwater of the Black Hills of South Dakota. In the first week of August every year, it suddenly comes alive with 250,000 odd bikers who converge on it. In the late nineteen-thirties, there was a group of biking enthusiasts who used to go racing on a dirt track on a hillside near Sturgis. On this occasion, their fiftieth anniversary in 1990, half a million bikers attended, which was a staggering experience. We left the Harley-Davidson factory in Milwaukee with the CEOs leading the way and it took us three and a half days to get to Sturgis. It was a thousand miles along Interstate 90 from Milwaukee to Sturgis. I also met up with Larry Mullen, Jr. from the Irish rock band U2 on this trip.

Another extraordinary ride on my Harley in America was from Miami to Daytona where you get to watch the ‘coleslaw wrestling women’ – the women wrestlers get into a big tank of coleslaw together and fight ferociously. A $500 purse is the prize for the winner. This is very amusing to watch, although you would not want to attempt to eat coleslaw again!

In England, at the end of August I used to go to a rally that was organised by the Harley-Davidson Riders Club of Great Britain where we camped out on a hillside in the middle of Shipley in Yorkshire.

Editor: Which was your most extraordinary bike-ride?

Richard Young: The ride mentioned above was the one that was probably the most remarkable. We spent three and a half days on the road, and travelled through a lot of the mid-West of America. It was utterly flat until we reached South Dakota, where we rode through a National Park called the Badlands Wilderness Area, which consists of 244,000 acres of strange rock formations – sharply eroded buttes, pinnacles and spires blended with the largest, protected mixed grass prairie in the United States. It was an area of haunting beauty.