HEATHER ANGEL – Where to Focus?

Irrespective of the length of lens, an image can be focused only in a single plane. However, more elements of a three-dimensional scene can be brought into focus, either by stopping down the lens or by using a smaller magnification, or both. Thus choice of lens influences not only the size of the subject, (wide angles embrace a broad view with distant objects appearing quite small in the frame, while long lenses enlarge unapproachable animals) but also how little or how much will appear sharply in focus.

When taking high definition shots for identification in a field guide or a large format calendar, the goal will be to maximise the depth of field by stopping down the lens as much as possible so that every whisker appears pin sharp. But there are times when a shallow depth of field may be a more suitable approach.

The reason why serious wildlife photographers use fast long lenses such as the f/4 500mm and 600mm Nikkors is not because we relish carting such heavy lenses on ‘planes and out into the field, but because we can make subjects ‘pop’ from an out of focus background. The downside of using any fast lens wide open is that you have to be very precise about where you focus. So far as wildlife goes, it is essential to get at least the eye(s) in focus and maybe part of the head. Other parts of the head are not so critical. This is where I find the M/A mode on these long lenses such a boon, because it allows instant switching from autofocus to manual focus with virtually no time lag.

When a lens is bought for a specific reason, such as a long lens to go on safari or a short lens to work in confined spaces, it is all too easy to mentally pigeonhole their uses to just these places. A more creative way of working is to be completely open-minded about which lens to use for each situation. For instance, in recent years, I have been using my 500mm for taking many plants and most especially elevated parts of trees such as large cones and magnolia flowers. In this way, I gain not only a completely different viewpoint, but also an uncluttered defocused backdrop. 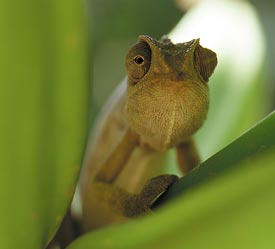 A glance at many advertisements and cookery books will show the current vogue for shallow depth of field shots. What a pity minimal focus was not popular a couple of decades ago, when the transparency film was Kodachrome 25 and we struggled to get high definition shots in fading light. Now the chemistry of transparency film emulsions gives us superb quality 200 ISO films, which can even be pushed a stop, with little discernible loss in quality. But when contemplating taking creative shots with the lens wide open at the maximum aperture, slower emulsions are not a problem - even in poor light. As always, a decision has to be made about where to focus the lens; either the foreground elements can appear sharp in front of an out-of-focus background, or the foreground can be blurred with a more distant sharp subject. Shooting through a gap in a leafy curtain can produce a soft green hazy frame that leads the eye to look beyond the leaves to the subject in focus.