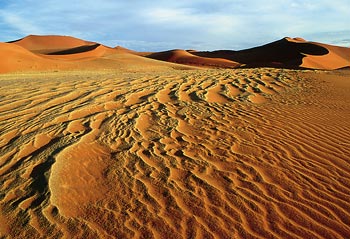 Gay Burdett is a Founding subscriber of the Nikon Owner magazine. She was born in Lincolnshire where she spent her childhood. She studied Pottery and Graphic Design at Lincoln College of Art, and later moved to London to study Graphic Design and Photography at the London College of Printing. Her very first job was an art assistant with Condé Nast Publications, and she later became Art Editor of Vogue. After ten years Gay left Condé Nast to enable her to work freelance, and three years afterwards, she became Art Director of BIBA1, which was an icon of the London fashion revolution of the nineteen-sixties. Finally, she became an art editor in the Book Department of the Reader’s Digest. 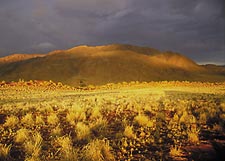 In this article, she explains how an early interest in photography was recently rekindled and shares her startlingly evocative images with us.

“My serious interest in photography first began when I was a student at the London College of Printing, but unfortunately, my photographic progress was slow due to having a full-time job. When I was freed from my employment seven years ago, I decided to rekindle my interest and to pursue the magical world of landscape photography. I am a solitary photographer who prefers to be alone to contemplate the landscape I see before me. This enables me to fully observe and take the viewer beyond the obvious viewpoints. I try not to rush. I want to be totally relaxed, take my time and settle into the photograph. 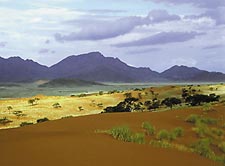 For over twelve years I had this compelling urge to visit Namibia2. One day Charlie Waite3gave me this opportunity by suggesting I went on a Light and Land3photographic holiday. I seized the chance and it was to be two weeks of a magnificent scenic experience.

The scale and beauty of the Namibian landscape is breathtaking with remarkable wildlife and some of the tallest dunes in the world. The majestic sensuous shapes of the dunes at Sossusvlei were beyond belief. We photographed some of the most magnificent landscapes – sand and gravel planes to stretches of grass savannah; gigantic mountain ranges to red sand strips; the Quivertree Forest; the forbidden Diamond Area and the deserted mining towns of Pomona and Kolmanskop. 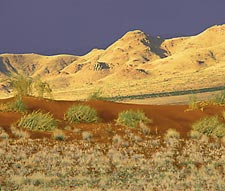 The most spectacular time of the year to photograph Namibia is the rainy season, which provides beautiful light in the early morning, dramatic storms in the afternoon turning to spectacular evening skies. One of the most memorable occasions was when we drove in the night to a viewpoint and watched the first rays of the sun at dawn turning the high dunes to ochre. The colour spread quickly to those in the distance, flowing down in patches of amber. As the brightness spread, its impact faded, turning the dunes a brilliant apricot.

Alas, this entire Namibian experience seemed all too short in time – I could have stayed forever. I will most definitely return!”

1 BIBA: A leading London fashion name in the nineteen-sixties, Barbara Hulanicki started a mail order business with her husband, Stephen Fitzsimon. Her ultra modern, non-conformist styles made her a cult figure in the fashion business and led to her opening the BIBA boutique in Abingdon Road in 1963. This was soon followed by a larger store in Kensington Church Street which had an all-black 1930s style décor with twenty or more potted palms and even more hat stands. Startlingly different from the shopping austerity that had gone before, the dark wood screens, low lighting and pop music gave the place the air of a discotheque.

2 Namibia: The Republic of Namibia is located in southwestern Africa. The border to South Africa is marked by the Orange River to the south and Angola to the north. The border to Botswana in the east runs along the 20th and 21st degrees longitude through the Kalahari Desert. In the west, a rugged coastline is created by the Atlantic Ocean.

Namibia is both one of the least densely populated countries in the world as well as one of the most arid regions in Africa. Rainfall in many parts of the country usually stays far below 500mm per annum. The extensive sand dunes of the Namib Desert, bare of any vegetation and up to 300 kilometres wide, stretch along the whole length of the coast. To the east of this coastal desert belt, a fissured mountain range, devoid of most plant life, rises up to 2000 metres and more. Further east, the mountains gradually lower into a vast plateau, where the landscape is dotted with perpetual ‘thornvelds’ and open bushland.

3 Light and Land: Photographic safaris are organised and run by ‘Light and Land’ and accompanied by Charlie Waite. Charlie is widely regarded as the doyen of English landscape photographers, and his work is in demand worldwide. His style combines graphic finesse with a spiritual quality of calm and serenity, and his distinctive treatment of historic Mediterranean landscapes in particular is instantly recognisable. Charlie never fails to inspire and encourage the participants in his photographic workshops.

SandyAcre Safaris provide local guides and expertise when in Namibia.