My Favourite Image
With Michael Eleftheriades

MICHAEL ELEFTHERIADES is a photographer and subscriber of the Nikon Owner magazine. He fuses together his particular passion for architecture, virtual reality, computer graphics and photography in the creation of large-scale panoramic imagery. 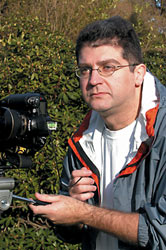 Michael Eleftheriades was born in Cyprus in 1965 and moved to the U.K. in 1978. His first experiments in photography were with pinhole cameras, and during the nineteen-seventies he often got to use his father’s Zeiss Ikon camera loaded with Koda-chrome film. “Once the processed slides arrived we gathered together for a slide show; in fact, I learned what makes a successful photograph by observing everyone’s reactions!”

By the time Michael went to university, he had accumulated a Nikon F2S Photomic, a Nikon FE2, an F3 and a variety of lenses, including a 20mm, 28-85mm, 80-200mm and a 55mm Micro-Nikkor, useful for photographing architectural models. “I vividly remem-ber spending days in the darkroom processing Cibachrome prints, and I loved their vibrant colour and electric quality”.

By 1986 he had started doing research into 3D modelling and purchased his first Apple Macintosh computer. In the next few years the media revolution occurred, concurrent with Apple’s QuickTime Virtual Reality, the first technology to enable the digital rep-resentation of 3D space. Michael explains: “The possibility of photographing a 360º view really excited me – it was a real challenge, requiring a new way of working.”

To capture the widest possible view, Michael invested in the 15mm Nikkor and photographed panoramas with his F3. These consisted of 12 images or more, shot vertically and blended seamlessly into one continuous image. The cost of film and scanning mounted however, and tricky lighting conditions meant that locations sometimes had to be reshot. When Nikon launched the Coolpix 900/950 series, Michael immediately saw the benefit: “What attracted me was not just the ability to see the images, but the availability of wide-angle and fisheye converters in an affordable package.”

His first set of images was shot in Greece, where the expanse of land-scape, sky and sea lent themselves well to this methodology. However the technique came into its own when Michael started to photograph interiors of old buildings. “It’s difficult to convey the feeling of a space in a single photograph, and with a wide-angle lens, distortion usually makes it look unreal. My photographs are processed to remove this distortion, yet still portray a 360º view. Printed in a large format, my intention is to draw the observer into the space and make him feel as though he is there.”

“My favourite image is a 14 shot pano-rama taken with a Coolpix 950 and a WC-E24 wide-angle converter in the courtyard of a house in the old quarter of Nicosia, the capital of Cyprus. I spent the day photographing the interior and kept returning to the courtyard until the light was favourable. Due to the wide variation in contrast, I shot a set of images for the average exposure, another for the highlights and another for the lows.”

Today, Michael shoots with a Nikon D100 and the 14mm f/2.8D or 18mm f/2.8D AF Nikkors, a Kaidan panoramic head and a Manfrotto carbon fibre tripod. But he still carries a Coolpix and wide-angle converter for backup.