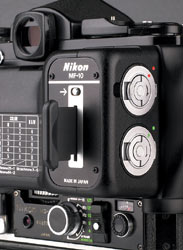 During the period that Nikon F2 cameras were being produced, Nikon made two very special application cameras, the F2 High Speed (see the last issue) and the F2 Data. Both of these were made in limited quantities and are now highly prized and sought after by avid collectors. It is the latter camera, the F2 Data, that we will examine in this issue.

The 36-exposure and 250-exposure F2 Data cameras were designed for scientific/industrial applications. They consisted of a slightly modified standard F2 body equipped with a choice of finders, the DP-11 (F2A), DP-12 (F2AS) or DE-1 (F2), plus either a MF-10 Databack for 36-exposure or MF-11 (with the MF-1 magazine) for 250-exposure operation. Simon Stafford’s images on these pages show the non-metered F2 Data camera (fitted with the DE-1 eye-level finder). These F2 Data camera sets represented the most advanced equip-ment available at the time for precision 35mm recording techniques. 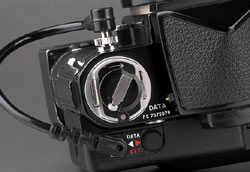 The MF-10 and MF-11 Databacks offered three separate devices for entering data – the time-piece unit, the date unit and the memo plates. The removable timepiece or clock had three hands with a mainspring-powered movement for up to 24 hours continuous use. The dating unit featured year/month/day selection with click-stopped thumb-wheel controls. The memo plates were available for recording of hand-written information such as lens settings, shooting location, type of film, etc on the image. A set of 12 x 21mm memo plates was provided with each camera. All these items fitted into special mounts on the rear of the data-back for easy installation. The mechanical timepiece had to be removed where-upon it could be rewound.

The design of the MF-10 and MF-11 made the data imprinting at the left edge of the frame of the image. This could include exposure information, time and date. These data-backs were capable of operation with both colour and black and white films. A particularly interesting design feature of the databacks incorporated a high-density, short duration electronic flash capable of synchronization of any shutter speed. The film was illuminated from the rear via a precision 10mm f/1.8 lens (four elements in four groups.). An iris diaphragm controlled the exposure to match the requirements of the lens in use.