“I believe you must never be blind to the suffering, but equally the suffering should never blind you to the good.” - Nick Sidle

Beneath the Southern Ocean, just an arm’s length from a great white shark, graphic images are being recorded by a photographer locked in a steel cage suspended in the depths of an inhospitable sea. At the same time, over 10,000 miles away at an inner city school in the U.K., children are being guided through a unique photographic chronicle illustrating the lives of Serbs, Croats and UN peacekeepers, their fears, hopes and sacrifices.

Nick Sidle, founder subscriber of the Nikon Owner magazine, will tell you that being in such close proximity to a great white shark “gives one a sense of sheer awe”. He will also tell you that most of the photographic tasks that he engages upon will be used to enlighten, change ideas and to fight prejudice and intolerance. Frequently the outcome of these assignments are photographic narratives about the often-shattered lives of people who are far too ordinary to ever steal world headlines from their political leaders.

Nick has completed a staggering volume of work, from graffiti on New York subway trains, to sculptures in Indian temples; from wildlife in the African bush to the skeletons of ships beneath the Red Sea or the war-scarred communities of Kosovo and Bosnia. He has also photographed wildlife on most continents and in most oceans. His catalogue includes elephants, crocodiles in Thailand, seals off the coast of Scotland, vultures enjoying a colourful feast on the plains of Africa, moray eels in the Indian Ocean. 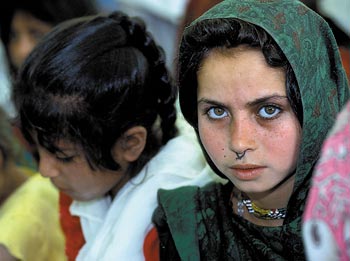 Although some aspects of photo-journalism have become muddied by sensationalism and intrusiveness, Nick believes in telling stories the way they are, but sensitively as well as graphically.

He was in Afghanistan in May of this year on an assignment for the children’s organisation Heartstone1, which also acts as a picture and features agency to gain wider use for the photographs taken. This was only a relatively short time after the fall of the Taliban regime following the campaign by America and her allies after the September 11th terrorist attacks.

He writes here about his experiences.

“When I first arrived in Kabul as a journalist travelling with British troops deployed as part of ISAF2, the International Security Assistance Force, I was taken straight off the transport aircraft into a tent to be given a safety briefing. This included how to deal with such issues as landmines and unexploded shells, bombs and other debris of war, along with the problems of sanitation, disease, security and related factors. These procedures are standard and very necessary; I have had to attend similar briefings when covering stories in Kosovo and Bosnia. But in Afghanistan there is a uniquely different situation that should be remembered: the country has endured over twenty years of almost unbroken armed combat and civil war. The price that everyone has paid is beyond the comprehension of anyone from the West. 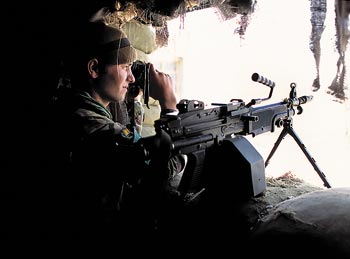 However much I thought I might have an understanding of conflict situations, I really did not know what to expect. Entire districts of Kabul were almost literally razed to the ground; whole areas of what used to be houses and buildings reduced to rubble. Yet other streets were relatively intact and shops were beginning to open again and starting to trade, as some sort of normal life began to return. Refugees were arriving back in greater numbers every day and there was a real sense of a community working for a future, however valid or extensive the problems might be.