Hunters & Frankau is the largest Havana cigar importer in the UK with a lineage from the late eighteenth century to the present day. Havana tobacco has always enjoyed universal fame and has long been recognised in terms of flavour and aroma thanks to the combination of extraordinary geographical factors and the expert, painstaking efforts given to the growing and harvesting of the leaves and the skill of the cigar-making process.

Morton R. Edwin in his celebrated book, Half a Century of Tobacco, wrote: “Up to the present, there can be no question that the tobacco of Cuba is the aristocrat of its class. For cigar smokers in all the world, there is something magical, a special enchantment associated with the words Cuba and Havana, when they are associated with the idea of fine tobacco.” 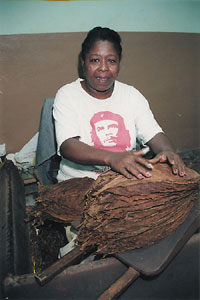 Havana is the largest city in the Caribbean and the centre of all things Cuban. Richard Young was invited there by Hunters & Frankau during the week of the prestigious International Cigar Festival, Festival del Habano 2002, held from 25th February to 1st March. The Festival del Habano has been staged annually for the last four years by Habanos SA, the Cuban company that distributes Cuban cigars worldwide. The idea behind this prestigious event is to make it possible for cigar enthusiasts and traders worldwide to meet with the leaders of the Cuban cigar industry and celebrate their passion for the world’s finest cigars.

Richard Young tells us about his week in Havana.

“I arrived at Havana airport, a long but comfortable flight via Iberian Airlines. Havana is an interesting city, much of its heritage of glorious Spanish colonial architecture still evident, often under restoration. In spite of its unstable history, Havana suffered little damage in the country’s wars and revolutions, and stands today much as it was built 100 years ago or more. There is an air of faded glory about the city, big ’50s and ’60s American auto-mobiles still dominating the streets and paint and plaster peeling off everywhere. I stopped off briefly at a cocktail party in a castle on the other side of old Havana and met up with some colleagues. Then I returned to my hotel, the Hotel Nationale, where I relaxed in the balmy warmth of the veranda in a comfortable colonial-style wicker seat, drinking exotic rum cocktails, momentarily reflecting with some envy on the lazier days of an earlier century.

On Tuesday, accompanied by other visiting journalists from all over the world, I visited the Partagas factory, Havana’s oldest cigar factory in ‘down-town’ Havana where four different brands of cigars are made. The visit lasted for four hours, and demonstrated to us the whole process of cigar-making. I photographed everything from the selection of the leaves, the rolling of the cigars, through to the point where the edges of the leaves are finally stuck together with a trace of (natural) gum and the cigar guillotined to the desired length.

Later that afternoon we were on a coach heading for the Pinar del Rio province, 120 miles west of Havana, to an area where tobacco is harvested in the mountains. The climate at this altitude is perfect for encouraging the leaves to grow abundantly in their natural habitat.

We got up early the next day to take pictures of the sunrise and the valley, the bright warm sunlight beginning to filter through the atmosphere, images hazy and meandering like spirals of cigar smoke. In front of us, the tobacco plantation carpeted the whole valley. After breakfast we set off by coach to watch the farmers harvest the cigar leaves. We all went into the fields, which were covered in white cheesecloth, or topada, to protect the crop from wind, disease and insects. The tobacco plant, according to its leaves, is divided into three parts: the corona, the centre and the bottom, all of which are harvested, the tobacco grower apparently having to care for each of his plants as though it “were a delicate maiden”. At this point I noticed an extraordinary sight – a man coming towards us on stilts, like a circus performer. He was about ten feet high. His job was to pick off any diseased leaves at the top of the plants, and later to take down the protective cloths and put them away for the next planting. We spent two hours watching the process of how the leaves were harvested then dried out and bundled up for shipment to the factories in Havana.