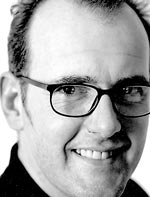 Professional photographer Paul Dawson is a founder subscriber of the Nikon Owner; his experience covers most photographic disciplines and allows his varied client base to draw on a wealth of knowledge.

“‘International problem solver and multi-media specialist’ is perhaps an unusual description for a free-lance photographer,” says Paul Dawson, “But I feel that a photographer today can no longer simply shoot and supply pictures for a client traditionally. He or she has to juggle logistics, expectant clients and deadlines to produce any-thing from a single stunning image through to a full web presentation.

Although there are still design groups and agencies that prefer the established methods, I am increasingly asked to put together Flash animations, QuickTime Virtual Panoramic Tours and websites from the pictures I shoot, and I feel it is imperative to keep expanding my own perimeters.

After getting a Degree in Graphic Design specialising in photography, I became a photographic assistant and was exposed to a variety of equipment and formats. However, I always gravitated to the Nikon system. My first Nikon camera, the Nikon EM, was dredged from the bottom of a lake and did not look as though it would survive the experience. But a few days on a radiator and a lot of condensation later, it was working perfectly!

Soon afterwards, I bought two F3s and these, along with manual lenses ranging from 20mm to 300mm, accompanied me on most assignments throughout Europe, America and the Far East. I conservatively stuck with the F3s and an F4 until the F5 had really proved itself with colleagues. Perhaps this was because I had only previously used a hand-held meter (never trusting the onboard meter), manual focus and fill-in flash via a Mecablitz gun, set manually.

This often meant slow shooting (sometimes I had to check the exposure with an F4 fitted with a Polaroid back) and a tendency to produce ‘set-piece’ images. However, the Nikon system offered Matrix metered balanced fill-flash, superb autofocus and accurate exposure metering which in theory left the photographer free to shoot what he saw. An important step for me was to be ‘brave’ enough to allow Nikon to sort out the exposure, flash and focus. At that point I realised how good the whole Nikon system was.

I have just completed a week of Annual Report photography where I used my present F100s and AFS lenses in temperatures ranging from +27° to –24°, shooting studio pictures in London, a warm superstore in York and a deep-freeze warehouse in Birmingham! The only problem that occurred was the battery in my Minolta meter dying in the freezer.

Depending on the job, I use whichever format is necessary, but I still prefer to shoot film, scan it later and then manipulate the image. However, having used the D1X recently, I feel a change to an all-digital approach is imminent. The only drawback with digital is having to ‘process one’s own film’! If only Nikon could solve this little problem as well!”