David Suchet - A Detective and his Nikon
By Gray Levett

It is a cheerless afternoon in late February. Winter is winding down with a weary wetness; the grey sulleness of the overcast skies giving London an anonymous, indistinct aspect, buildings in a grainy mono-chrome, hurried figures damply swathed in raincoats.

The taxi drops me off outside the theatre. I momentarily glimpse the spectre of a London of the nineteen-thirties, an earlier more measured age: tailcoats and opera glasses, women colourfully sequined and flamboyantly feathered, dashingly smart chauffeurs, uniformed maids, white caps starched and folded with origamic primness. As I climb a labyrinth of stairs to the dressing room, I could well have mirrored the devoted paces of Captain Hastings running to greet the meticulously punctilious detective Hercule Poirot himself, perhaps trying to help him solve a viciously executed murder backstage.

The illusion dissolves. It is, in fact, the year 2002 and I am outside Dressing Room 8 of the Wyndams Theatre, Charing Cross Road, heart of London’s entertainment and shows. I am meeting David Suchet, the much loved and respected British actor, to interview him about his passion for photography and how he came to choose Nikon. He has just finished an extraordinary performance in The Play What I Wrote, directed by Kenneth Brannagh.

It was with his superlative portrayal of Agatha Christie’s Hercule Poirot in London Weekend Television’s lavish productions starting in 1989, that David Suchet first achieved worldwide stardom and national-treasure status in the U.K.; even Her Majesty The Queen is an ardent fan. (He also received a BAFTA nomination for Best Actor in this role.) As far afield as Japan, Poirot is watched by tens of millions of viewers. In fact when David last visited Japan he was treated like an honoured head of state.

David Suchet’s breadth and range as a character actor is extraordinary. His definitive Blott in Blott on the Landscape earned him a BAFTA for Best Actor. His Detective Karaman in A Perfect Murder, co-starring Gwyenth Paltrow and Michael Douglas, was solicitously astute. His ‘wonderfully irritating’ Salieri in Amadeus on Broadway received a Tony® nomination. A recent role in BBC’s star-studded drama Victoria and Albert, David’s hard-bitten detective John Borne in NCS Manhunt, and his brilliantly bullish entrepreneur Augustus Melmotte in Antony Trollope’s The Way We Live Now (also nominated for a BAFTA) illustrate a remarkable ingenuity in the whole fabric of his acting.

As chance would have it, I arrive to interview him on the very day he has just been nominated for the Royal Television Society Awards (he sub-sequently won this prestigious award) for The Way We Live Now.

Dressing Room 8 of the Wyndam Theatre is utilitarian, even spartan, yet one entire wall is amply covered with notes and cards from well-wishers and other celebrated thespians.

Dressed in an open-necked charcoal grey shirt, David Suchet is as disconcertingly unlike Agatha Christie’s creation of the arrogant egocentric Belgian detective as is possible. For one thing, he’s thinner (Poirot’s stout form is due to clever padding), younger and much better looking. Moreover, even as the interviewee, David is a warmly welcoming host and is unaffectedly concerned that I am comfortably seated and that I have somewhere to put my tape-recorder. 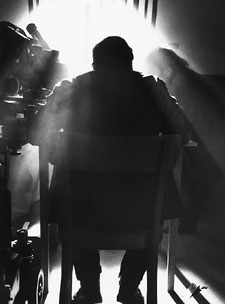 David was born in 1946, the middle son of an eminent Harley Street gynaecologist and a respected London stage actress. He was sent to boarding school at the age of eight, and went on to public school a few years later. It was initially expected that he would follow his father’s footsteps and work in the area of medicine, but David joined the National Youth Theatre and resolved to become a professional actor. He studied for three years at LAMDA, the London Academy of Music and Dramatic Art, and in 1973 joined the Royal Shakespeare Company. A number of notable roles followed, including The Fool in King Lear, Caliban in The Tempest, Bolingbroke in Richard II, Shylock in The Merchant of Venice, and Iago in Othello.

He has also held a post as director of The Old Vic Theatre, and as a member of The Trust Council of The Royal Shakespeare Theatre.

David’s family is a very united one. He married Sheila Ferris, a former actress, in 1976, and has two children, Robert and Katherine. He keeps in close contact with his two brothers; his eldest brother John is a celebrated broadcast journalist. David’s pleasures are wide and various. He enjoys music; he was a jazz drummer in the 1960s but now prefers the quieter tones of the clarinet and classical music. Besides Beethoven, Vivaldi and Mozart are among his favourite composers. He is also a keen ornithologist and nature lover. One of his great loves is the canals of Great Britain, supporting them and their restoration as well as enjoying them in his own narrow boat with his wife Sheila.

As for his interest in photography, that, he tells us, started long before he could walk or talk.

Gray: When and how did your interest in photography begin?

David Suchet: My interest in photography really began before I could even walk or talk. My grandfather was James Jarché5, a famous Fleet Street photo-grapher who took lots of pictures of me. I must have had more flash in my eyes as a baby than most other babies in England. He was a wonderful man and a fanatical photographer!

He was a people’s photographer for London Illustrated News and worked for the Daily Mail. He worked for Hannen Swaffer6 in Fleet Street, for all the old boys in fact, and became the highest paid photographer in Fleet Street. Although it has been contested, we believe that Jarché was one of the first people to move from plate to a 35mm Leica. I believe this to be true and I still to this day have his Leica M3 in my possession; in fact, I will never let it pass out of my sight. I have his lenses too, to which I have added a few more, and the Leica M6. We spoke about photography very early on in my life and he taught me about the f stops and the speed and the depth-of-field as well as buying me my first Brownie Box camera.