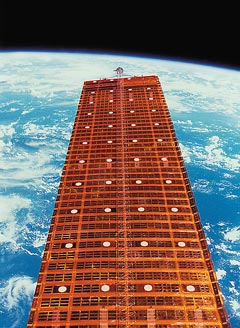 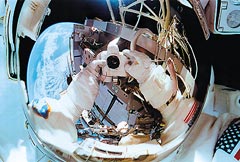 When Apollo 15 set out for the Moon in the summer of 1971 carrying a lever wind Nikon Photomic FTn, with an 55mm f/1.2 Nikkor lens fitted, it had been considerably modified - and this was an ever present feature of photographic equipment during the early years. An oxygen atmosphere aboard the spacecraft made stringent demands upon on any form of electrical circuitry – which usually had to be reworked and sheathed – and any form of fabric covering (particularly plastic) was normally removed since in micro-gravity there was a risk of toxic or inflammable gases being released. Special lubricants were required also.

While used in a limited experimentation role during the last three Apollo missions, the camera obviously impressed because at least two were aboard the Skylab space station in 1973/74. One was dedicated to a US Naval Research Laboratory experiment studying ozone layers in the Earth’s atmosphere and was fitted with a specially designed 55mm f/2 ultraviolet transmitting lens and a twin UV transmitting filter assembly. The other camera was to be used with the already tried and tested 55mm f/1.2 lens for recording comparison images in normal light. The cameras can be seen on Page 44, top left (b/w photo). It is evident that now the units were motor driven and reference was made in Part One to the considerable use made of the Nikon for general purpose photography. The Photomic FTn once again went into space during the ASTP mission of 1975 when a 35mm f/1.4 Nikkor was also fitted.