Spring is the season of new life and fresh beginnings, a benediction of nature as the stark landscape of winter softens and becomes less defined. Days lengthen with the shifting of the earth's axis and skies are momentarily filled with hazy rain or drifting blossom. Woodlands are cathedral-like, columns of tall trees not yet in full leaf, birches clothed in their white linen bark.

As the earthy floors of Britain's deciduous forests begin to be filled with a profusion of colours and shapes, from the delicate white star of the wood anemone and the vivid yellow petals of the celandine to the deep sapphire of the bluebell in flower, smaller creatures take advantage of the early blooming. Butterflies and other insects are just beginning to function after the long months of winter hibernation and are able to feed on the plethora of nectar that the wild flowers produce.

With the Latin name of Hyacinthoides non-scripta, but sometimes called 'wild hyacinths', bluebells can be found growing throughout most of the woodland areas of the British Isles, particularly in woods that have been coppiced. In Greek mythology, Hyacinth (Greek: Hyiakinthos), the heroic son of the King of Macedonia, was a youth of great beauty. According to myth, Hyiakinthos competed at discus with the god Apollo, but was tragically struck down and fell to the ground. The legend states that as Hyiakinthos lay dying, Apollo, in his grief, made a flower, the hyacinth, spring from the spilled blood. 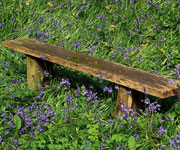 The bluebell wood is considered to be a very British phenomenon; bluebells do not grow in such abundance anywhere else in the world. Surrounded by its very distinctive narrow leaves, the bluebell's graceful flower, usually violet-blue, can be white or even pink. When bluebells start flowering in the late spring, pushing their way through a dense copper-coloured carpet of leafy autumn debris, they make use of all the accessible light before the boughs of the trees above them become too thickly covered with leaves, which can prevent much of the sunlight from reaching many of the flowering plants on the woodland floor.

Although its season is short, the evocative beauty of the bluebell wood is an fragrant reminder not only of our woodland heritage, but perhaps too of our own childhood memories of the countryside, faces rapt as we listened to stories of the Wild Wood and wondered in awe what was just beyond in the Wide World.

The bluebell as a species is protected in Britain under the Wildlife and Countryside Act 1981.