What Lies Beneath
By Linda Dunk 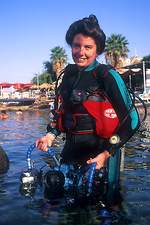 The idea of taking any camera, let alone a Nikon, anywhere near water, is enough for most photographers to provoke an attack of the jitters. As for going underwater, well, any normal person would surely have more sense than to take such risks, just for the sake of a picture or two.

So just why I have spent the last ten or twelve years struggling with the agony and the ecstasy of underwater photography can sometimes be hard to explain, even to myself. 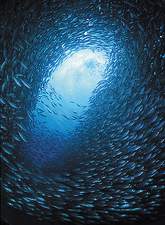 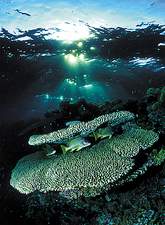 I suppose it all starts with the light. Not exactly a very original statement for a photographer, I must admit, but then the light underwater is so magical in terms of its quality and movement that a lifetime can easily be spent obsessed with trying to capture its beauty. Where else can you aim your camera directly at the sun, resulting in a stunning burst of light, surrounded, in tropical seas, by gradations of blue, shading into dark indigo? Looking downward into the depths, the shafts of sunlight create a cathedral-like effect, and at sunset, rays breaking through the surface of the sea can resemble constantly moving spotlights.

The inhabitants of the oceans must also bear some responsibility for my obsession. To find oneself entirely surrounded by swirling silver fish in their thousands, to observe tropical reef fish whose colours resemble those of birds of paradise in their natural environment, to swim with sharks and dolphins and to watch manta rays and turtles; these experiences have produced for me some of life’s great moments, and an over-whelming need to try to do justice to what I have seen by recording it on film. I have to say that most of the time, this can be a very tall order!

So what makes underwater photography such a challenge? Well, before you can take a shot, you have to be confident as a diver and to be able to maintain a steady position, sometimes in moving water, while preparing to take and then taking the picture. Even breathing in and out can change your position and thus the composition of the shot. A coral reef is a fragile ecosystem, and you need to be able to approach very close to this natural wonder of the world without causing damage. The pictures you take should be the only evidence that you were ever at that location, not a trail of broken corals.