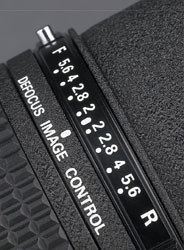 Of the many lenses produced by Nikon over the years a number have attained an almost legendary status. The high reputation enjoyed by Nikkor lenses amongst professional and enthusiast photographers alike is largely based on truly outstanding optics such as these.

There are, however, a number of equally capable Nikkors that for one reason or another have not achieved the same prominence. Amongst those lenses that have never fully emerged from the shadows of obscurity into the full limelight of popular, widespread use are some personal favourites of mine: the AI-S 28mm f/2, AI-S 50-135mm f/3.5, and the AF DC 105 f/2D. The latter is one of two such lenses, the other being the AF DC 135mm f/2D, that use Nikon’s defocus image control system (DC for short). The longer lens was introduced back in 1990, and two years later it was updated to the ‘D’ specification (see explanation below), whilst the 105mm lens first appeared in 1993. Even today they remain in a class of their own, their unique feature unmatched by any other manufacturer. Both lenses operate in exactly the same way, but for this review I am going to concentrate on the shorter lens. 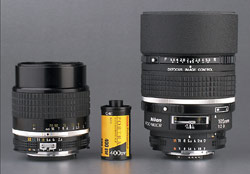 The DC 105mm is an auto focus (AF) D type Nikkor lens. The ‘D’ designation indicates that the Central Pro-cessing Unit (CPU) inside the lens communicates the focus distance information to the camera body for inclusion in the exposure value computations for both ambient light and flash exposures. The quality of construction is positively tangible; the all-metal barrel is finished in the crinkle pattern paint common on all high grade Nikkors, and contributes to the overall impression of a lens that is made to the most exacting professional standards. It weighs 640g and is 111mm long with a diameter of 79mm. The lens has six elements arranged in six groups, an iris diaphragm with nine blades, a minimum focus distance (MFD) of 90cm, and it accepts 72mm diameter filters. My only complaint concerns Nikon’s decision to use transfers for the lens markings instead of engraving them, because with extensive use the transfers will eventually rub off!

Beginning at the rear of the lens, closest to the camera, there is a conventional aperture ring offering click stops at whole stop positions.