Joanna Vestey, who is a founder subscriber of the Nikon Owner magazine, is a diverse and exceptionally talented photographer. She was highly commended in the Commonwealth Broadcasting Awards and won the Water For Life category of the Geographical Society/Telegraph Awards with an image she took whilst covering a severe drought in the South of Ethiopia. She came second in the Tom Webster Awards, and was proposed for a place in the World Press Master Class. In this issue, she talks about her photographic assignment in Alaska.

“I have an almost child-like curiosity about the world and a constant craving to travel and explore other cultures. I believe photography can be a window on the world and a way of explaining mankind to mankind.

One of my most unique assignments was in Alaska photo-graphing British explorer Steve Brooks and his partner Graham Stratford on their mission to be the first to drive across the frozen Bering Strait. 56 miles of drifting ice, freezing water and deadly currents lay between them and their goal, Siberia, the point where the East meets the West.

I was the team photographer for the project and was also working for Associated Press in New York transmitting daily updates of the story as it unfolded. A satellite dish (which was to end up planted in a snowdrift in temperatures of as low as – 40c), a PowerBook and the Nikon D1 were my main pieces of kit with F100s and slide film for features.

Within hours of landing in Alaska, I had transmitted my first pictures and started to really test the D1. It was fantastic: as long as I kept plenty of spare batteries inside my clothes and was ready to change them I had no problems. 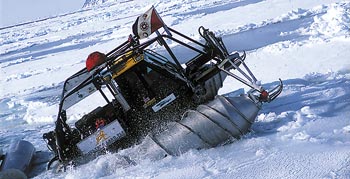 The town we were in had an Inuit population of around one hundred who were mainly subsistence hunters. They were very friendly if a little bemused by these curious British explorers attempting the seemingly impossible. There were moments when the intense cold became almost unbearable and they were always there lending mittens made of fur and thick coats with steaming cups of a mixture of coffee and cocoa.

Working from the frozen shores was an amazing experience. There were shifting currents from north to south that constantly moved the ice and changed its direction, often packing it into pieces the size of houses before being smashed. In some places there was open water where you could spot whales playing. In other places huge ice ridges creaked and groaned under pressure.

The team became the first to drive the 200 miles from Nome to Wales through a mountain range called No Hope Pass, over Heartbreak Ridge. Although an enormous feat, one of the flotation systems was damaged and, with temperatures so low, effectively mending the damage was virtually impossible. Unfortunately it became clear that the team would not be able to proceed towards Russia at that time.

On many of my trips, I have used both a D1X and the Nikon F100s with a range of lenses. I have been very impressed with how they have dealt with such extremes – desert temperatures of +42 and dust everywhere to icy cold winds of –40.