Shooting with a Top Gun
By Simon Stafford

A review of the SB-80DX, a universal Speedlight that can be used with either film or digital cameras. Simon Stafford takes an in-depth look at Nikon’s latest Speedlight.

The Story So Far 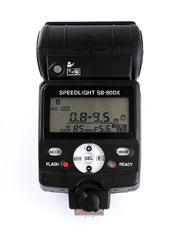 The evolution of Nikon’s design and manufacture of electronic flash units, which have always been called Speedlights, can be traced back over thirty years beginning in 1969 with the introduction of the SB-1 unit for the Nikon F SLR. Following this, there was a steady but fairly unremarkable process of development until 1988, when Nikon took flash technology into a new era with the release of their SB-24 unit. The SB-24 showed its true colours when used in combination with either the Nikon F-801 or F4 cameras, the semi-professional and flagship models of the time, with its many features including the rear curtain synchronisation and exposure compensation. These were linked automatically to a very advanced TTL flash control system.

In one step Nikon had opened the door to highly controllable, and thus creative, flash photography which had previously been the domain of only the most ex-perienced photographers. The SB-24 was followed by the SB-25 in 1992 and the SB-26 in 1994, each reincarnation bringing improvements to performance and design, based on feedback from photographers as well as advances in technology. The release of the SB-28 during 1997 saw Nikon’s mastery of Off The Film (OTF), Through The Lens (TTL) flash exposure control. These, when combined with cameras such as the F5 and F100 and using ‘D’ specification lenses that communicate the focused distance, lens aperture and focal length to the camera, reached a new level of sophistication.

How Does the System Work?

In film-based cameras like the F5, F100, and F80, there are two phases to TTL flash control. The first happens in minute fractions of a second before the shutter opens and involves a very rapid series of pulses of light being emitted by the flash unit; Nikon refer to these as ‘monitor pre-flashes’. The pre-flash pulses are reflected back to the camera’s TTL flash control unit by the subject and its surroundings. Then, in conjunction with the camera’s measurement of the ambient light, the focused distance, lens’ focal length, aperture, film speed, and any exposure compensation that has been applied, it makes an initial assessment of the reflectivity of both the subject and its surroundings to compute the required flash output. Once the shutter has opened to make the expo-sure, the TTL flash control unit measures the flash output by reading the amount of light reflected off the film, and quenches the flash instantly once it has supplied sufficient light. Nikon refer to this system as 3D Multi-sensor balanced fill-flash.