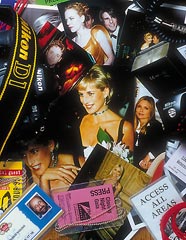 The taxi drops me off outside Richard Young’s London home.

It would have been tempting to play role-reversal and shoot him as he answers the bell, but the moment and the desire passes.

Richard opens the door. He has had only 4 hours of sleep the night before, working concurrently on three different jobs, yet he looks hardly fazed. 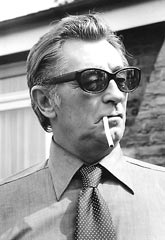 A rich epiphany of society’s faces and forms caught midstream between thought and action glanced down at me from Richard’s hallway, each one a motionless, encapsulated moment of time and place. Geri Halliwell, athletically patriotic in a Union Jack, Robert Mitchum, Hollywood hard man, dark glasses and a bent cigarette, Elton John in an avuncular embrace with Sharon Stone, Tom Jones and Robbie Williams, the king and the young pretender, Keith Richards, a glass, a Zippo lighter and a fag. The Queen, a mac, a head-scarf, dark glasses. For most people a disguise. For the Queen, a trademark. Badminton 1980.

This is no ordinary photographer. Nor indeed an ordinary man.

Steaming cups of black coffee are brought in as we settle down in his large comfortable lounge, facing a fairground model of a Harley Davidson, Richard’s alter ego.